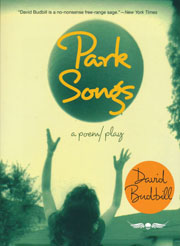 A collection of dialogues spoken by sixteen different characters, Park Songs opens up the intersections of poetry and performance, reminding us that “play” is a verb. The setting is an urban park—R.C. Irwin’s delightfully freakish accompanying photographs show people in concrete, paved environments, and even the duck pond populated with domestic geese suggests gravel nearby. Characters bump into each other as if wandering through a neighborhood square, many of them hanging out in limbo, waiting to move forward in their lives.

Tellingly, there is a poet, Mr. C., the park attendant. Mr. C. is not a successful poet, though, and he voices the angry thoughts of all unsung artists:

those motherfuckers got a hermetically sealed system and, Brother, either you play the game by their rules or you don’t get in! . . . They’re all a bunch of disembodied, cogitarian dipshits. Ideafiers with hands, eyes, nose, ears, lips, tongue . . . A bunch of crotchless, cockless, cuntless, thinking aparati, lexicalized cogni-buggers, ass lickers and dingleberry pickers, decipherers and dismemberers of The Word!

Budbill’s characters can also be plain-speaking, prosy. But the plainness of the language is deceptive, its rhythmic and vernacular play surprisingly evocative:

Jesse this is Shaun. Shaun this is Jesse.

Budbill gives instructions for how the play might be performed, in parts or as a whole, with or without music. Skeptical and eager to test the hypothesis, I asked a class of Intro to Poetry students, grumpy from just having turned in their first papers, to read several sections of dialogue aloud. Their moods immediately improved. They loved Park Songs’s humor, rhythmic language, and quirky characters.

The dialogues in the book’s first half introduce us to the characters and their problems: one works in a diner and longs for love, another suffers from a psychological ailment, another is a judgmental but frightened woman, etc. The scenes are slowly pulled together by the inclusion of a few blues songs, two of which are traditional, one original. In one way or another, all the characters sing the blues.

In the second half, the human contradictions develop. And despite that fact that Mr. C. is a poet, he is not the poet at the center of this poem-drama-opera. That honor should be reserved for the character Haal (rhymes with pal), so named because he Hangs Around A Lot. Haal is young. Towards the end of the book he asks the older Mr. C. for advice about a T-shirt business he wants to start, selling shirts with slogans like “Life Hurts.” Mr. C. does not cooperate, arguing the shirts will be as difficult to sell as poetry—doomed to failure. He is the poet who has given up on messages.

Haal, a young man with goofy creative optimism, finally persuades Mr. C. otherwise, and at the end we are left to understand that all the regulars at the park are wearing Haal’s T-shirt. Transformed into poems or lines of poetry, they wander through life, interacting with each other, all publishing their message in a new genre.