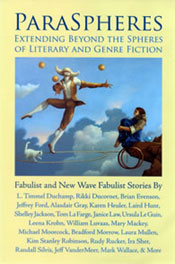 This anthology, as its subtitle “Extending Beyond the Spheres of Literary and Genre Fiction” suggests, attempts to map a peculiar space in its pages. A gigantic tome over 600 pages long, it seeks to bring together all sorts of non-realistic literature under one roof. Perhaps more than anything, the book makes an argument regarding how perceptions about fiction are cultivated, how we seek to categorize literature before we even start reading it. ParaSpheres is full of superb stories, but the results in regards to its argument are not clear-cut—even though the anthology is probably stronger because of that. Just as the individual stories risk a great deal in their linguistic and structural play, the overarching conceits of the collection provide a reading experience that is not easy to categorize.

This partly comes about because the editors have largely abdicated offering any structural guidance, instead offering a looser organization that revels in “sampling” the many fruits that “Fabulist and New Wave Fabulist” fiction can offer. Because it is so large and wide-ranging, there are times when this “sampling” impulse might bewilder the uninitiated reader, and threatens to overwhelm the sight-lines that the editors establish in the essays that begin and end the volume. Adding to the disorientation is the fact that novel excerpts aren’t telegraphed as such until the biographical note at the end of each work. And while the mixing of reprinted material and original work adds to the overall quality, context in this book is sometimes a difficult quarry. For example, Alasdair Gray’s incandescent “Five Letters from an Eastern Empire,” originally published in 1979, was a work that I first thought was contemporary, in that it dealt so keenly with creating art in a time of imperial power, and how that power creates the conditions from which one interprets works of art—issues that have a particular cast in 2006. Though I was thrilled to learn of this story, I had whiplash upon realizing that it was published 27 years ago. This in itself didn’t detract from the reading of the story, or its unsettling after-effects, but it did cause the mind to do a little time traveling, a disorientation akin to landing in an airport halfway around the world the day before you left.

This push-pull exhibits itself in other ways throughout the anthology. At the end of the final story, Michael Moorcock’s “Cake,” there appears this note: “The editors have placed the above work of narrative realist literary fiction, ‘Cake,’ at the end of this anthology in order to assist readers in their return to reality.” This makes the assumption that the reader is going to read the collection in order, although the sheer size of ParaSpheres and the multiplicity of authors and narrative styles therein otherwise invites a non-linear reading, moving around in various directions and orders. And there’s a more substantial “assist” to reality after “Cake,” in fact—a long exegesis by editor Ken Keegan about the “third way” between genre and literary fiction that ParaSpheres wants to travel. “Writers who want to write artistic work are discouraged from starting out with and later experimenting with a style that will be classified as genre fiction,” the essay states at one point. However, writers ranging from James Tiptree (Alice Sheldon), Gene Wolfe, Cordwainer Smith, R. A. Lafferty, David Bunch, and Carol Emshwiller, among others not represented in this book, have all managed to carve out an experimental—or at least boundary-pushing—space within the science fiction and fantasy genre. Their work hasn’t always been the most popular (and Bunch, sadly, is all but forgotten), but the genre—despite its often conservative tugs—has been a surprisingly accommodating place for more experimental work having at least a place at the table. And it’s hard to parse what’s really at stake in sentences like “as fabulist fiction becomes more fantastic it becomes fantasy fiction, or if more metaphysical it becomes horror or new-age fiction, or if futuristic it becomes science fiction.”

Still, it’s hard to fault an anthology of strange stories for having a strange reason for being, and if “New Wave Fabulism” is difficult to pin down, then the book can exist as a “cabinet of curiosities” rather than an attempt at canon-making. This harkens back, interestingly, to earlier presentations of literature in America and England, in which literary specialization was less of an issue; as Heather Haveman describes it in “Antebellum literary culture and the evolution of American magazines,”

The first recorded use of the word “magazine” to describe a collection of printed material was in the title of Gentleman’s Magazine, founded in London in 1731 as “a Monthly Collection, to treasure up, as in a Magazine, the most remarkable Pieces on the Subjects above-mentioned, or at least impartial Abridgements thereof” (Gentleman’s Magazine, 1 (1): 48, January 1731).

Similarly, ParaSpheres is setting forth its own almost prelapsarian idea of genre; when the writers within are trying and uncovering new aspects of stories, it’s often with the same abandonment as Poe and Hawthorne had exercised. Thus, Paraspheres, or any anthology that explores a boundary-less netherworld of genre, is going to have a looseness to it, an Articles of Confederation governing its spirit rather than a Constitution, and the challenge becomes to turn that into a strength.

ParaSpheres most often rises to the challenge via the stories themselves, which often inhabit that same netherworld; it is filled with stories making their way into fabulist territory from the necessity of awkward and strenuous political conditions. In Shelley Jackson’s “Short-Term Memorial Park,” a man is the groundskeeper to a bevy of war memorials. The story begins with a list of 30 memorials to wars such as “War of Combat Chat” and “War of Authorized Retailers”; we learn that “Each monument has a rating (7, 4, 9, 7.2, 5, etc.), and you will find these numbers in small print on our map, so that if you are not troubled by back pain you can pitch in and show appropriate degrees of respect for each monument.” Brian Evenson’s “An Accounting” depicts the unintended consequences of an apocalyptic journey into the nation’s heartland in the future, where the narrator unwittingly becomes a “Jesus” to wastelanders who have little else to live for. Stepan Chapman’s “Losing the War,” a short reprint, stuns in its audacity, imagining War as a character who ends up being not threatening, but pitiable.

So, for the most part, the book’s quirks of organization don’t impinge on the often breathtaking impact of the stories themselves. In fact, its failure to organize according to known paradigms gives ParaSpheresa jagged, unpredictable atmosphere that aligns well with the content and linguistic strategies of many of its stories. And how this unpredictability relates to literary genres is the central issue of the anthology itself, with much of the work therein attempting to move beyond genre considerations. ParaSpheres thus creates a kind of “tumbling” effect, disrupting conventional quantities (the inherent pauses and closures that one expects an anthology to provide, for example) in favor of discovering shared qualities.

With this in mind, it’s interesting to note how many of the stories in ParaSpheres juggle multiple narrative strategies. Robin Caton’s “B, Longing” (an excerpt from a longer work) is a fine example of this, deftly balancing a contemporary story and a fairy tale—both of longing and rejected identity—as well as an exegesis on the nature of language. Similarly, Anna Tambour’s “The Beginnings, Endings, and Middles Ball” is a devilish romp through abstractions-as-characters, having the sharpness and playfulness of metaphysical poetry. (Here it’s worth noting that Omnidawn, a relative newcomer to the field, has made a name for itself publishing challenging contemporary poetry by the likes of Lyn Hejinian, Norma Cole, and Martha Ronk.)

The existence in ParaSpheres of multiple stories by some authors also points toward a super-annuated excess—belying once again the standard operating procedure of most recent anthologies. The editors aren’t afraid to over-tip the apple cart with a one story/one author policy, and the multiple stories by the authors therein usually live up to the billing. Justin Courter’s “Skunk” (excerpted from a novel to be published by Omnidawn) is, well, about a man’s love affair with a skunk. The most amazing aspect of the story is that it actually turns out to veer, by the end, from the creepy to the sweet. The same author’s short story “The Town News” is a deeply affecting work that has more conventional touchstones (e.g., a man who can see into the future), but is written with a strange poignancy that binds these elements together into a seamless whole.

If genre, in all of its incarnations, is posited in this book as an open question, then the reader is certainly going to get more than one answer. It takes more than saying that the prose in this anthology is “poetic”—such a qualifier risks being misread for rococo floridity (just as when a novel is described as “lyrical,” it’s usually the pre-Raphaelites that come to mind, not Lorine Niedecker). Rather, taxonomic rigidity is the least of our concerns. It’s hard to point at what’s going on in literature in the middle of it occurring—what is important is that, whatever we call it, work that pushes the boundaries of genre produces a rich ecosystem. And this is amply demonstrated by so many stories in this anthology: from Laird Hunt’s one-paragraph zinger “Three Tales,” to the peppering of bizarre novel excerpts by Finnish writer Leena Krohn, to the dreamland sibling rivalry of Karen Heuler’s “Jubilee Dreams,” and on and on. In a society where illusion is the new mimesis, an anthology like ParaSpheres doesn’t point toward other worlds as much as point toward ours, and how we have let our public and private spheres become, alternately, reverie and nightmare. The chaos in this book is ours.