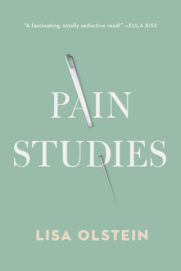 I once sprained my ankle by jumping (inanely) to touch a street sign, landing sideways. My ankle turned purple, swelling up grotesquely. I could hardly sleep for a week. Then I healed and things went back to normal. In my life, fortunately, pain has been rare. I have friends with chronic back pain, arthritis, tension headaches. How could I begin to understand their experience? Qualia, in philosophy, refers to the internal and subjective part of sense perceptions. Chris Eliasmith defines qualia as “The ‘what it is like’ character of mental states. The way it feels to have mental states such as pain, seeing red, smelling a rose, etc.” While some philosophers agree that qualia exist, they can’t agree on which mental states have qualia, or even what qualia are. Pain perception—like all sense perception—is private by nature. The way my ankle felt is my own experience; there’s no way to prove that my experience of pain is the same as yours.

Such were my thoughts while opening poet Lisa Olstein’s non-fiction book, Pain Studies, in which she describes coping with a mind-boggling nine-and-a-half years of migraines. In the spirit of Maggie Nelson’s The Argonauts and Joan Didion’s The Year of Magical Thinking, Olstein often detours away from her poetry “lane”: exuberantly shifting from Emily Dickinson to Bruce Springsteen; Antiphon to Donald Judd; The Passion of Joan of Arc to House M.D. I gradually began to think of Pain Studies as a kind of travel literature, a Gulliver’s Travels-like guidebook for those visiting the land of pain (or, more specifically, Olstein’s private pain island)—with the goal, perhaps, of exposing us tourists to the landmarks and key phrases of this land, so we might learn to be more sympathetic to the citizens who live there full time.

In her attempts to comprehend and find relief for her migraines, Olstein has tried everything from modern medicine to alternative remedies like Botox, acupuncture, beta-blockers, homeopathy, and Chinese herbs. She’s puzzled through the labyrinthine data on migraines, resulting in more questions than answers, and a good deal of frustration. Olstein is suspicious of simple categories and binary thinking. She rejects Oliver Sacks’s 1970 book Migraine for its easy answers, but loves its appendixes and case histories, especially the first-hand accounts of migraineurs. Most notably, Olstein finds a kindred spirit in the twelfth-century French nun Hildegard of Bingen, a well-known mystic. Migraine contains drawings of Hildegard’s visions—”a shower of brilliant stars”; “figures radiating from a central point . . . brilliantly luminous and coloured”—and Olstein relishes such qualia-epiphanies: the way Hildegard’s migraines remind her of Donald Judd’s “100 Aluminum Boxes,” which she spent time with in Marfa, Texas.

Throughout Pain Studies, Olstein struggles with the irony of articulating the ineffable: “we’re notoriously bad,” she says, “at talking about [pain], even literally, as in, do you have it, how much, where, what kind?” Pain is pre-verbal, reducing us to muttering primates. So Olstein describes pain figuratively, like we do to describe light (à la Hildegard), art (à la Donald Judd), or God (à la Joan of Arc). She rejects the standard pain scales, which simplistically assign pain a number from one to ten: “they weren’t,” says Olstein, “written by the right people—the people in pain.” She prefers to think of pain in non-linear ways, such as the Beaufort Wind Scale, which describes the ocean on a clear day (“Sea surface smooth and mirror-like”), as a storm drifts in (“Sea heaps up, white foam streaks off breakers”), and when it reaches a full squall (“Air filled with foam, sea completely white with driving spray, visibility greatly reduced”).

As much as Olstein would like her pain to disappear, she’s aware that years of migraines have helped create who she is today. “In any given moment,” she says, “my relationship to language may be actively metabolizing migraine, and when migraine isn’t currently present, that relationship is still shaped, like anyone’s, by my accumulated experience—its form as much as its content.” She cites an episode of House M.D.: House decides to take Vicodin over Methadone because the latter, though it can make his pain manageable, dulls his doctoring skills: “without the irritation of his pain, that toil, without its friction, its urgency, something—it’s hard to say exactly what—he isn’t himself. His genius is linked to his pain, and without it, his genius diminishes.”

Olstein never tells us what pain is, only what it is like to live her life through its lens. The sum total of who she is has been formed by this thoughtless force, which she likens, in its enormity and mindlessness, to a glacier. It’s too easy to call the migraine negative. The migraine is life itself, interwoven with every aspect of her existence. “The difference,” Olstein says, “between recalling the flu and having it . . . is like the difference between hearing a description of waves and drowning.” So Pain Studies, voyaging to the land of pain, allows us tourists to smell the salt spray and see the brilliant stars, from the safe distance of our seats.