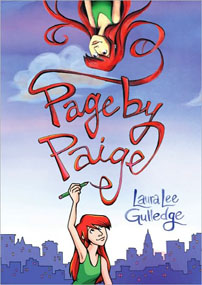 The plot in this perfectly crush-worthy graphic novel couldn't be simpler: Paige Turner (don't snicker: her mom and dad wanted a writer) has moved from bucolic Virginia to Brooklyn Heights, halfway through tenth grade. She's sad to leave her best friend in Charlottesville, but happy to take her new sketchbook everywhere; she tries to draw what she sees, and how she feels, in New York. As her new year unfolds, she makes new friends (they read comics too), starts to kiss and hold hands (it's an all-ages book), and learns to share her work. Paige, her new sort-of-boyfriend, and her new friend Jules ("You are the Hopey to my Maggie") execute life-affirming stunts like tying Easter eggs to neighborhood trees, and Paige learns how and when to talk to her mom.

Most comics about teen life are either so stylized that they can't tell the truth, or intentionally un-pretty, rough, awkward. Page by Paige seems happy to take neither path; with her affable lines, her apparent ease, and her restraint, Laura Lee Gulledge makes Paige's milieu a pleasure to visit, but she also gets it right. It's the kind of teen story that goes with an indie-pop soundtrack, two-thirds we've-all-been-there and one-third you'll-wish-you-met-her. Gulledge, who wrote and drew the whole thing (barring guest panels, on which more below) shows a faultless sympathy with her characters, even when she must know more than they do; her visual style fits their moody innocence, their optimism, and their fears.

It also fits Paige's own artistic ambitions. In her pace, her approach to story, and her degree of detail, Gulledge recalls the Alison Bechdel of Fun Home. But Fun Home was ruled—at times, almost derailed—by its focus on words and the authors of words, on comics as (and as the rival of) "literature," prose memoirs, novels and poems. Page by Paige follows the growth of a visual artist, a teenager whose inner life develops in images, portraits, layouts, scenes; Gulledge can therefore have all sorts of fun with page and gutter, line and half-tone, oneiric distortions and realistic angles, while keeping us wholly immersed in Paige's points of view.

Not just a book about a girl who makes pictures, Page by Paige reminds us what pictures can do, how they can earn our trust, lead us to one another, or let us rebuild ourselves. Sometimes we seem to be looking into Paige's sketchbook, sometimes at what a camera around her would see, sometimes at what's inside her mind. One early two-page spread takes as its backdrop the great foyer of the Metropolitan Museum of Art. "My parents, like most everybody else," Paige muses, "see this version of me: the quiet redhead who draws stuff." While tiny visitors roam stairways and columns, Paige in profile, in foreground, at extreme left, contemplates another Paige, eyes closed, in profile at extreme right. Around this second Paige are smaller Paiges, waving hello, blowing bubbles, fretting, or frowning—they are the other versions of Paige, invisible (so far) except through what she herself draws.

Gulledge, and Paige, use words well: "I try to be open about what I'm into so maybe other people can see a reason to strike up a conversation with me," Paige explains. "I have 'Little Mermaid' hair (which I like to hide behind) . . . And I use all my telepathic strength to emit a 'Please talk to me' vibe." But Paige—like Gulledge—uses words instrumentally: she lives, and the comic thrives, on what she sees. Ironwork streetscapes, intimate close-ups, night skies, crowd scenes, six- and eight- and four- and two-panel layouts, isometric and asymmetrical . . . something new crops up on every page, in Gulledge design and in her choice of what to draw, and yet it all fits the constraints of an all-ages audience.

It fits, too, her sweet and shy and heartbreakingly self-conscious protagonist. Tableaux show Paige lost in a forest of helium balloons; Paige as an old-fashioned switchboard manager, crossing and uncrossing gigantic wires; Page as a Lego figure, a plein-air tightrope walker, a sculptor with her chisel, a were-lynx. One page shows a conversation in Jules's bedroom, its four panels (interrupted by doors, beds, hemlines) either cozy or confined; right after that, an outdoor chat heightens the contrast of indoor and outdoor, intimacy and exploration, by suspending its talking-head panels, one by one, over a two-page view of Brooklyn Bridge.

Gulledge's peppy, photo-packed blogs, whoispaige.com and whoislauralee.blogspot.com, say more about her work and its reception: her friends, as she remarks, resemble Paige's friends. Some of them, as comics artists themselves, contributed single panels or sketches to Page by Paige—the panels that represent work Paige's friends wrote and drew. She wants to be true to them, as well as true to herself, and so her story reveals only her secrets—the panels that would otherwise say what happened "when Jules opened up to me," for example, come obscured by drawings of opaque barriers, cardboard, police tape. It's one of many moments when Gulledge takes her young protagonists as seriously as their strong emotions deserve, while finding a way to play, to explore comics form.

"My pencil can do anything!" roars Paige-as-lynx when she decides to put drawings online; Page by Paige could make you say as much about Paige's creator, whose friendly, approachable take on visual modernism has few equals in any medium. I can describe more panels, or more episodes, from Paige's not so complicated life, but there's no way to say how good it is in only a thousand words; you are invited to see for yourself.