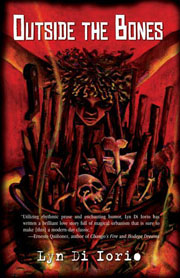 The high octane, hilarious, sexy, and strikingly original voice in Lyn Di Iorio’s Outside the Bones will take you for a ride you will not soon forget. The voice beautifully matches the passion and energy of the main character, Fina Mata, a Puerto Rican living in Manhattan and a self-described bruja, or witch:

Animal blood is the offering favored by the nkisisand nfuiris. And I understand the primitive principle behind it all. Blood is the most sacred form of energy, and when the spirits drink they become enlivened to help us in this world. But shit, we ain’t on the island no more, we don’t sacrifice in the mountains of Africa or Cuba; we do it in our apartments. Can’t we substitute and modernize a little with the other aspects of the religion? Streamline and make it more up to date?

Fina falls hard for a musician named Chico. When Chico’s old lover returns from the island, along with a woman who may or may not be his daughter, Fina seeks out fellow bruja Tata Victor to help her win Chico over. Problems arise when the two of them unleash a spirit bent on revenge. If the plot sounds like a soap opera crossed with the movie Hellraiser, it’s because it is. But the voice, along with Di Iorio’s subtle working of class and race, keep the novel from falling into melodrama.

“There is no heaven, fool,” said the Ancient One. He was more than three hundred years old, and in life had been a great sorcerer, a slave tortured to death for inciting slaves to rebel. His head had been rescued by Tumba Fuego’s ancestor and had spoken since then to the rescuer’s descendants.

The magic in Di Iorio’s novel comes from the Afro-Caribbean tradition, and the author mines the relationship between the masters of the black arts and the spirits they conjure to evoke rich comparisons to slavery. The question becomes who controls whom as the spirits summoned gain more and more power.

Outside the Bones is first and foremost a page-turner. Like so many of us, Fina has been scarred by her past, and the novel illustrates well how ghosts from the past can help one to heal, to become whole. The title refers to the spirits that have left their physical bodies and haunt this novel, but it also refers to the redemptive power to which only our traditions can give us access: “In the water. They die to live again, outside the bones.” The real mystery in Di Iorio’s ghost story doesn’t have to do with discovering the identity of the murderer, but rather with Fina coming to terms with what happened to her father, who was also a practicing witch: “I knew something bad was coming, and part of me didn’t want to hear it. But it was inevitable that I learn what it was, because in a sense, I already knew it. ‘It’s something I’ve been needing to remember my whole life.’”