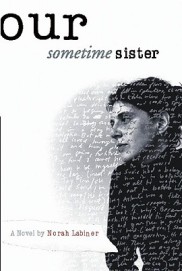 Our Sometime Sister introduces an author in love and at battle with her forebears. She imitates and resists, she flails and soars; even when she fumbles she does so with irresistible charm, intimacy, and a bittersweet wit. In one chapter, you may hear shades of Humbert Humbert breathing down your neck; then there's a hint of Molly Bloom, running thoughts together like a train rumbling past at dizzying speed; finally, a figurative Fortinbras enters the scene, an unscathed witness of the wreckage. References to Hamlet abound, from the title ("our sometime sister, now our queen") to the characters' homework assignments. Wittenberg is the escape. Elsinore, the defiled family home. And among all these literary references, Labiner casts subtle strains of Van Morrison and Bob Dylan as well.

While the novel is largely about imitation and literary trickery, it is also about a young woman, Pearl, writing a novel whose characters' lives in many ways resemble and reflect her own. They are mostly young, midwestern discontents, many of them having some interest in Hamlet—whether
for its dramatic possibilities, its disappointing portrayal of women, or its deeply layered poetry. As the book progresses, Pearl's almost idyllic relationship with her mother is thrown drastically off-balance by her new stepfather (Labiner's own Claudius), a wily, wealthy, self-help guru who bribes her to leave home for a boarding school in a remote Michigan town. As Pearl relates her own life, she also reveals the not-so-ideal lives of her made-up characters.

In the book's patchwork construction, every other chapter belongs to Pearl, while the rest belong to the characters, who, despite their distinctions, often come off sounding suspiciously like Pearl herself, or at least like each other—down to their reasons for liking the Old Testament, their admiration for the more glamorous women in their lives, their interest in the melancholic Hamlet. These disparate parts were probably once hidden in the author's (not just Pearl's, but the real author's) sketchbook. She couldn't bear to throw them away so she came up with this clever metanarrative: the real story of this novel is the story of "Pearl" writing a novel and finding her own voice in the creation of other voices. Not a bad solution, and one Pearl herself excuses in the foreword.

The novel may be large and unwieldy, yet at the same time it is so damnably readable, so chatty and familiar, so promising and friendly and erudite, that it soon becomes irresistible. Of her mother, Pearl says, "She tossed her words like shoes, kicked them off and sent them skidding across the floor to land at a sexy and risqué angle, stiletto heel overturned and suggestive." Pearl's nonsensical chapters are particularly rich and strange. She writes: "I walk the halls listening door by door, each to each. I check behind the tapestries, the chairs, painted screens, and I am certain I heard it that time; the swish of her retreating skirts, the click and clacking of her well-heeled shoes."

Labiner has a good time with her literary predecessors and is as comfortable among them as she is with the dregs of a Michigan winter. She uses her knowledge to great effect, adding a layer of acrobatic playfulness to her characters' voices. Yet as she wrestles with these admirable mentors, too often she simply surrenders. She straightens her skirt and walks away, allowing her attempts at imitative virtuosity to stand as just that. When the Nabokovian richness collapses into sloppy repetition, what lies beneath is a talented writer still practicing her moves. While the novel casts about for coherence through various literary tricks—there's the novel within the novel (and even another within that, though that never quite gets off the ground), the aforementioned imitations, the apologetic foreword, the occasional Hamlet-inspired coincidences—what we're left with is just what the narrator warns us about in the beginning: an ambitious heap of "all my saved scraps of the past; quite frankly, junk, odds, torn movie tickets, candy wrappers, marbles, patches of fabric . . ."

It's absurd to complain about a book, however, when the novel's own narrator has already done all the complaining for you. In the foreword, recalling the apologies of nineteenth-century novels (in which the narrator and the author often appear to be one and the same), the narrator of Our Sometime Sister confesses all her intentions, shortcomings, and hopes, beating the reader to the punch and taking away any desire to throw punches in the first place. This self-conscious and delightful preface also provides for much of the reader's circling back and forth in search of illuminating clues among the snippets of otherwise almost straightforward storytelling. Labiner covers every possible criticism in Pearl's foreword, at the same time opening the door to her readers, literally welcoming them inside. "I can't, I won't keep any secrets from you. How could I? I confess to you that I failed, but I kept trying and I swear if you can make it past chapter ten it gets better, really. I'm not being coy."

em>Our Sometime Sister is written with an unstoppable energy that seems to have found its perfect match in the English language. Labiner's fluidity speaks for years of labor and love, and though she may be part of, and speaking for, a generation of suburban teens of the '70s and '80s, she defies all the hip clichés that this generation has been saddled with by so many publicity agents. Even if the tricks are just tricks and the characters are often just recycled scraps of earlier creations, I'd take this bundle of rags and candy wrappers over a fit and trim tailored ladies suit any day. It's as if the reader—"not the collective reader out there, but you"—is invited to wear pajamas, sift through some great old books, and hang tight till the narrator finishes her story. Despite the book's repetitions and blind alleys, Our Sometime Sister is far more a pleasure than a chore.