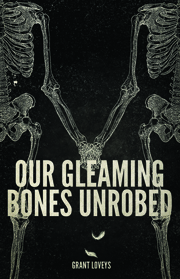 While the title of award-winning fiction writer Grant Loveys’s first book of poetry, Our Gleaming Bones Unrobed, calls to mind the tough, disembodied structure that underlies experience, it also suggests, by a trick of opposites, the body that enrobes this structure and obscures its luminescence. This paradox runs throughout the collection, most evidently in the poems’ use of physiological imagery and metaphor. “Method,” for instance, imagines “the streetlight’s teeth through wet leaves”; in “On the Occasion of a Book Burning”—perhaps the book’s most gratifying poem—Loveys writes that “the universe’s heart is a ruined house” and that “a pile of ash in a clenched fist will turn to blood.” Yet in opposite fashion Loveys reaffirms the body’s place among the world of things: “the china plate of your skull,” “the church of his chest,” “my heart just a drop of blood / suspended in an amber jar.” Although Our Gleaming Bones Unrobed refuses to offer any easily accessible narrative or theme by which the reader may understand the collection as a sequence, the insistent imagistic movement between embodied and disembodied forms acts, one might say, as a kind of ligament between the poems.

So preoccupied with the constructive and deconstructive powers of the gaze, Loveys’s speaker tends to recede, earlier in the book, into a mode of detached observation; at times, the speaker becomes an eye without an “I.” “Wolves” in particular, with its disinterested, God’s eye point of view, recalls the absent first person narration of Alain Robbe-Grillet’s novella Jealousy with lines such as “A fresh spurt of blood like gold thread on the snow” and “The moon knuckles a skin of frost from its eye.” Remarkably, the speaker’s self-effacement exemplifies the prevailing tension between flesh and bone, being and not-being. Often, this relentless gesturing toward physical sensation, accompanied by a progressive disembodiment of the “I,” threatens to tear Loveys’ poems apart.

Further along in the collection, by contrast, the speaker returns with renewed presence as the central actor in a series of absurd narratives suggestive of the work of fellow Canadian-born poet Mark Strand. Among these later poems, “Apes” and “No Mercy” stand as two of the most engaging examples of Loveys’ use of symbol to lend force to dreamlike narrative without falling into sentimentality:

This morning I awoke to an ape
resting in a slant of light
on your side of the bed.
It smelled of your lotioned skin,
worked its joints into your usual
slumbering tableau,
your rhythm in its cavernous breath
as it opened its damp eyes.
(from “Apes”)

In the final analysis, Our Gleaming Bones Unrobed remains less interested in investigating the psychological nuances of its speaker than in formulating a broader anatomy of matter and meaning. Loveys arrives at the book’s title via a pronoun transformation, the generalization of a line from “Funeral through a Glass Bird,” “your gleaming bones unrobed.” This move from the poem’s “your” to the title’s “our” at once enlarges the semantic scope of the title and, in its extreme breadth, weakens its power of representation. The corollary, the speaker’s alienation from the world of the poems—his refusal and, finally, inability to participate in that world—seems strangely apt in a collection that concludes: “Sometimes the world’s indifference / makes all the difference in the world.”