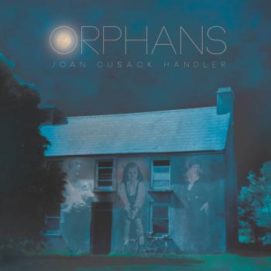 This collection of poems is an extended elegy to Joan Cusack Handler’s parents, who were immigrants from Ireland. The lives of the Cusacks were centered around work and belief in the Catholic god—and that meant the rosary, Mass attendance, and being dutiful about it. The poet’s mother didn’t last as long as her spouse, who lived to be ninety-nine. Cusack Handler’s lines are heartfelt bordering on sentimentality at times, but not enough to forget cleavages in any relationship:

In strong, terse lines the poet conveys her own longing in the aftermath of a parent’s death. Much of this book contains elegies of forgiveness mixed with remnants of anger at both parents. In unrhymed couplets spread across the book’s wide pages, Cusack Handler evokes the frustration of loving a difficult person:

I catch myself praying again.
My mother’s failing.

How long have we left?
She has a right to what love

You can help me feel now, Lord;
she’d know it.

As the poet remembers and depicts her father, she also reflects on her own mortality. Now over seventy, both she and her husband face the inevitable. For this reader, this section is the richest, most moving part of the book. Naturally, the poet examines her own terror of death, and who could blame her? The lines between life and death can blur in an instant.