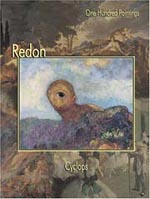 It seems a basic human need to glean the greatest achievements in any given medium into a tidy list, usually the round figure of one hundred, especially at the end of a century. We like to mop up the untidy creativity that bursts out everywhere and make it more manageable, more accessible. In the last few years we've been inundated with lists of the top one hundred books, movies, music videos, and various other top one hundred lists. If I've seen every movie on that list, then I've experienced the best that actors and directors can provide and needn't stray to other films. It saves me time at the rental store, trying to decide what to get. I don't have time to read every book written, so I'll turn to the list of great books and thereby join the literati. There's a problem with this, of course: many great works of art are lost in the margins. But if we take those lists with a grain of salt, knowing they exclude worthy works, they can be useful tools with which to further our education. 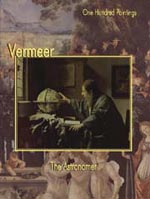 Take the series of One Hundred Paintings. It is not called One Hundred Greatest Paintings of All Time, so there are no false claims here. It is merely called One Hundred Paintings, selected and explicated by the late Federico Zeri, "eminent art historian and critic." Each slim volume takes as its subject a single canvas by a famous artist, and from there explores that artist's work and life in no more than 48 pages. These books are great introductions, ideal for anyone who wants to enter the world of the artist and decipher the symbols and iconography he uses in his interpretation of inner and outer worlds. The books follow roughly the same structure by 1) presenting the painting in question; 2) delving into an analysis with highlighted details of the painting that explore style and technique; 3) discussing the production of the artist, other paintings that further develop an understanding of the artist and his predilection for certain subject matter; 4) giving the historical context in which the artist thrived; 5) showing the legacy of the artist and how his work influenced subsequent artists; 6) offering a catalogue of principal works, documents and testimonies by other artists, a brief biography and bibliography of books, and a list of museums in which you can find the artist's work. There's quite a lot of information packed into these books, along with dozens of color reproductions and photographs that help illustrate the artist's world.

Some volumes work better than others. Among the best is The Cyclops—an excellent introduction to the fantastical imagination of Odilon Redon. The singular artistic eye provides the thematic glue which holds the entire volume together quite profoundly. We follow the detailed description of The Cyclops looking fondly over a crag down at the sleeping nymph below, who appears to have emerged from the rock and flowers. There is no sense of menace, just a rich proliferation of color and organic, impressionistic brushstroke. Zeri shows how Redon flattens his perspective by putting the nymph and the Cyclops on the same plane. Later in the volume, we are again shown this flattening effect of a profiled woman facing a richly colored burgeoning explosion of flora and micro-organisms. Redon's bizarre images were reflections of his artistic research into "improbable beings according to the laws of probability, placing, insofar as possible, the logic of the visible at the service of the invisible." His work was greatly influenced by literature, music, and science more than by other paintings, as he gave form to the phantasmagoria of Edgar Allan Poe, among others.

The volume on Vermeer's The Astronomer—a possible self-portrait—doesn't provide as much clarity on the subject matter of this painting. We leave the astronomer gently touching his celestial globe behind too quickly in favor of exploring the use of Vermeer's pointillist technique that enhanced the depiction of light in his paintings. Unlike the other volumes, many of the reproductions here are poor and congest the page so much that paintings overlap each other and degrade and confuse the points the text make. Some of the pictures are cut in half by the binding, a grave layout mistake, leaving much of the fine detail lost in the fold of a page. Even so, I enjoyed seeing the recurring objects in his paintings: the jug and the ermine lined jacket pop up quite a lot. Perhaps some artists just don't fit very well into this prescribed structure, their oeuvre proving too multifaceted for a single painting to exemplify. 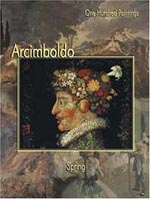 Arcimboldo's Spring, on the other hand, proves to be a fun painting to explore in this format since the artist mostly stuck to one trick: composite portraiture. And luckily, the symmetrical pairs of the series of paintings called Seasons and Elements are all represented in brilliant color. One could spend hours studying the profiled faces. In Spring, the face is made up of flowers and foliage, with a tulip for an ear and rosy buds for lips. In Air, Spring's pair, the face is made up of birds—every bird different. The other pairs are Summer and Fire, Earth and Autumn, and Winter and Water. Arcimboldo worked for the imperial family of Ferdinand I, and later for his heirs, Maximillian and Ferdinand II. These monarchs collected exotic and strange objects from all over the world in their extensive Kunst und Wunderkammern as well as rare plants and flowers in their gardens, from which Arcimboldo sketched his fantastical paintings. As Zeri puts it: "The artist's utopian search consisted of a pursuit of the dream of grasping, in the fleeting multiplicity of things, the unity of the divine, and of reconstructing the One from its fragmentation into what is visible."

The text of these books was based on interviews between Federico Zeri and Marco Dolcetta, and for the most part it flows quite beautifully and gives a lot of information—maybe even too much—within the constrictions of structure. It feels as if you are being guided through a museum of the one artist, with the guide pointing out a brushstroke here, a color there. The text is always constrained to the page at hand so you can linger over the pictures instead of being rushed to the next page to finish the sentence. These are smart and affordable books that can appeal to any person, no matter what age, who wants to learn more about a particular artist. Among the artists I already mentioned, One Hundred Paintings also has books on Schiele's Self-Portrait with Hand on Cheek, Degas' The Dance Class, Rembrandt's Supper of Emmous, Kandinsky's The First Abstract Watercolour Painting, Van Gogh's Starry Night, and Bocklin's The Isle of the Dead. Thirty volumes have already hit the stores, so 70 more are on the way. I can't wait to see who else gets selected for this unusual and fun treatment.