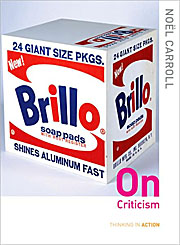 This book is best read by the light of another, John Carey’s What Good are the Arts? (Oxford University Press, 2006), a witty, truculent, masterful polemic which argues that a “work of art is anything that anyone has ever considered a work of art, though it may be a work of art only for that one person; and the reason for considering anything a work of art will be as various as the variety of human beings.”

What a work of art isn’t, says Carey, is what many people who spend their lives working in the field say it is. It isn’t, for example, what Arthur Danto claims; according to Carey, Danto—a critic for The Nation—believes with Immanuel Kant that art is special, that there is a kind of “trans-historical essence in art, everywhere and always the same.” To see something as art requires an “atmosphere” of artistic theory, a knowledge of the history of art. Only those who possess this are qualified to comment on a work of art because they are privy to its background and intention; success of the work is thus determined by the extent to which it achieves this intent. What results, says Carey, is a transcendental knowledge that automatically overrides personal, subjective opinion, an authority whose verdict cannot be questioned.

Loaded with dazzling, pugilistic rhetoric, Carey’s arguments demolish this Kantian scaffolding, but in so doing, they leave us stranded unhappily in an anarchic quagmire of subjective relativism, where the intentions of artists are unknowable and the opinions of those who haven’t, for example, read any 20th-century fiction are deemed just as valid as those of critics who have read them all.

On Criticism methodically hardens and recaptures this ground, constructing a foundation upon which criticism—objective, evaluative criticism—can reasonably operate. As a starting point, its author Noël Carroll makes the case for measuring artistic success and value against authorial intent, similar works, and categorical purpose. Where Carey flippantly dismisses intentionality as something that Danto et al. still cling to with a “frantic desire” for certainty, Carroll—whose book Danto praises, examines it with a scientist’s microscope, meticulously refuting its “effective disposition” while at the same time expounding a philosophy of criticism.

Carroll’s argument proceeds, albeit tortoise-like, as follows: If there are no rules of art, there can be no evaluative criticism. Evaluation presupposes comparison, which cannot be made if all artworks are deemed “unique.” If however one accepts that this uniqueness is exaggerated, and concedes that most if not all works of art fall into a genre, stylistic movement, artistic oeuvre, or tradition, then appraisal is possible. Works can be judged based on the extent to which they implement the known purposes of their categories and meet accepted criteria of artistic excellence. The degree to which art realizes these goals determines its success or failure—i.e., its value. Without measurement criteria, evaluation cannot be based on reason. And without reason, Carroll tells us, we have no criticism, for the goal of criticism is to discover what is valuable and worthy of attention, and to provide compelling reasons that explain why.

Much of Carroll’s book is dedicated to defining the process of criticism, and defending the primacy of evaluation therein. Evaluation is feted as the essential component of criticism. Art is defined as the intentional production of the artist, the artist as an individual creator of value. Criticism, says Carroll, is about the discovery of value, not the clinical dissection and interpretation of various codes, signifying systems, or regimes of power. Description, contextualization, classification, elucidation, interpretation, and analysis are all discussed in terms of what they contribute to the articulation of those reasons upon which evaluation is based.

Throughout On Criticism, Carroll neatly throws many of the standard objections to intentionality and objective evaluative criticism up into the air, and, like so many skeets, shoots them down, one at a time. He argues, for example, that although the establishment of general artistic evaluative criteria is indeed virtually impossible, objective categories into which artworks might fit are definable; these categories are the ropes of reason that can pull us from Carey’s quagmire.

Considerable effort is also spent defending “intentionality.” In addition to the introductions, interviews, and manifestos that artists provide us with, detailing intent, Carroll argues “Barely an hour goes by when most of us are not involved in interpreting the words and deeds, the sayings and doings of our conspecifics.” Furthermore, he writes:

The ability to read the minds of others is an indispensable part of social existence. Why not approach the interpretation of artworks in the same way? . . . Isn’t it very likely that [this] is on a continuum with the interpretive propensities that appear to have been bred in our bones by natural selection? . . . Is it really so unreasonable, for example, to infer that artists intend their works to pursue the purposes associated with those categories that their works appear to belong to? Or to postulate that most artists, most of the time, want to relate to their audiences?

The cardinal value of this book is that it raises and addresses many current contentious issues that will be of interest to anyone involved in the practice of criticism. As will Carroll’s manifold definitions of the critic: he or she who says what is good in a work, pinpoints what is valuable, bolsters observations with compelling reasons, and helps an audience to understand and get the richest experiences possible from those artworks under evaluation. The critic, Carroll tells us, also assists the reader in discovering what is of value in the artist’s achievement. Finally, because of the central role categorization plays in his “objective” critical process, Carroll concludes that the good critic should also be a master of the history and categories of the art form in which he or she specializes, and of the culture in which it lives.

On Criticism is not easy to read. Unlike What Good are the Arts? it isn’t polished. There are few memorably clever lines, too much repetition, cliches riddle the text, and words frequently stumble over each other. And yet, despite all of this, like the good-natured nerd who eventually beats out the Big Man on Campus for the girl (at least in American movies), this book wins the contest. It argues convincingly that critics are indispensible lubricants to the practice of art, that their opinions count more than the average Joe’s, that artistic intent can be determined, and that relative merit can reasonably be defended. Though perhaps not containing the smoothest talk, this book is filled with persuasive arguments that will provide both substance and sustenance to those who engage with it.