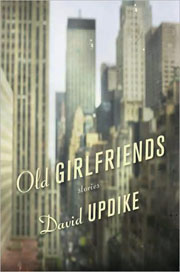 David Updike’s aptly titled Old Girlfriends fans the embers of old flames. The second story, “In the Age of Convertibles,” brightly paints the milieu of 1960s youthful romance—“the beautiful, inaccessible girls we would see on the beach . . . the pantheon of goddesses of our high school, tanned and bikinied”—before the protagonist focuses on one less ethereal, a girl with “a beautiful constellation of freckles that spread across her upper chest, just above the top of her floral bathing suit, and the pale, intoxicating edge of untanness.” Updike’s painterly gift with description carries through the collection, making the reader wish there were more stories to savor.

Old Girlfriends is Updike’s first collection since Out on the Marsh two decades ago. The stories are set in the Northeast, in New York City, and in England, Africa, and the Caribbean. They cross both geographical lines and lifelines, moving from adolescence to old age while touching on the lives of young sons, graduate students, a middle-aged couple, and a widowed grandmother, among others. Updike effectively moves across various times of his characters’ lives while exploring the inner life of his male protagonists, who both mature and age.

To the author’s credit, judgment is reserved even as the characters sometimes make questionable decisions. In “Geranium,” the narrator observes the compromises of an older couple who coast through society’s stop signs; the title brings to mind Matisse’s still life while the story captures a calming French ethos. “Still Shining Brightly in the Sun,” in which a grandmother struggles for independence while proving an essential landmark for her university student grandson, also presents rough roads. But it is difficult to state when Updike’s driving is best, or what time of life he travels most brilliantly, for the stories all shine.

Both “Love Songs from America” and “A Word with the Boy” are set on foreign soil, and both stories powerfully embark on the path of the father-son relationship—the latter so strongly that it reads like autobiography. While all the stories are rife with brilliant description and laced with shades of subtle irony, the title story (also the longest story) drops off an old girlfriend before driving through a blizzard in a Volkswagen Beetle to return home with a new girlfriend. This Bildungsroman exemplifies Updike’s generosity as an author, and his protagonist’s gradual journey to commitment.

The final story, “Adjunct,” begins uncharacteristically with more streamlined narration; pages fly by, but as events and details accumulate, the story deepens. The single professor is left with the departure of his crush: “His face was still flushed and the ends of his fingers tingled where they had touched her hair. Beside him, the seat where she had been sitting was still warm. He pressed it with his hand.” With its window to a night’s lost chance, and to life’s and love’s near misses, it is a fine end to the journey of Old Girlfriends.