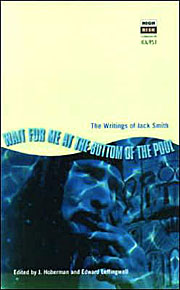 “Corniness is the other side of marvelousness,” argues Jack Smith in his breakthrough essay “The Perfect Filmic Appositeness of Maria Montez.” Published in Film Culture months before the release of his film Flaming Creatures, the piece champions a trash aesthetic of “personal masterpieces,” rhapsodizing over a “whole gaudy array of secret-flix” remembered from Smith’s childhood. “Dorothy Lamour sarong flix,” “all Spanish Galleon flix,” “all Busby Berkeley flix,” and “all musicals that had production numbers,” are included, but as the title indicates, a special reverence is reserved for the Marvelous One, B-movie queen Maria Montez—Smith’s lifelong muse and star of such “secret-flix” as Arabian Nights, Ali Baba and the Forty Thieves, and Cobra Woman, from which he lifted his taste for over-the-top Orientalist exotica, convulsive sensualism, and pulpy plot elements. Invoking and attempting to channel the spirit of Montez in his own work, Smith paid homage to “whatever in her that turned plaster cornball sets to beauty.” The wonder and gorgeousness of art, as Smith saw it, was in making glory out of junk—exotic pyramids of Baghdad built from mounds of plaster in a ruined loft apartment, for instance, or fearsome creatures like the White Bat and Green Mummy costumed entirely in secondhand clothes and rags. Movies, as a medium, were magical, related to dreams, offering escapist hallucinations and, via the flickering of visual images, ecstasy.

Yet for Smith, art was not merely “entertaining, escapist, stunning, glamorous,” etc. It was also conceived as a “dream weapon” against the oppressions of capitalism, landlordism, and the rental society. In Smith’s personal argot, the scum of Baghdad was the term for the most receptive of audiences, and the Lobster was synonymous with individual landlords and the crushing regime of property ownership more broadly. Pasty normal straights and sugar zombies alike were held under the grip of these red claws, but worse, for the underground artists, was the fact that “critics are the hand maidens (sic) of the Lobster.”Flaming Creatures met first with infamy (raids, arrests, legal battles) and then with entombment in the crypts of critics. Jonas Mekas, who purchased, toured with, and was arrested for screening the film, became a villain in Smith’s mythology: Uncle Roachcrust, Uncle Fishhook, Uncle Oldie, Uncle Artie, etc. “Still, it’s nice to be let out of the safe every ten years whenever there’s some retrospective program,” Smith would snarl in his performance piece “What’s Underground About Marshmallows?” This collection voices such rage while also offering a broader context for understanding the pageantry and passion of Smith’s films and his understanding of his own political agenda.

Along with his revelries devoted to Maria Montez (both nonfiction and fiction), his rants against landlordism and narcotics laws (“Marijuana,” he argues, is “not more a drug than consumerism and much less hypnotic than landlordism”), and his theories on the use value of sexual fantasizing in general (“the pitiful means whereby the truly unpleasant difficult sex function is swathed in glamour, perversity, and ultimately, simply, interest”) and pornography in specific (“of course when the quester after ecstasy finds realistic love the sex fantasies are put aside and forgotten”), there is also included here a probing interview with Sylvére Lotringer, who examines Smith’s anarchism and his idealistic notion of a socialist society based entirely on “social ways of sharing.” Journal notes on the filming of Normal Love (featuring poet Diane di Prima, who, after a scene revolving around a giant Claes Oldenburg birthday cake, promptly gave birth to a son) and hilarious scatological routines like “The White Pig of the Medina” (which reads as imitative of William S. Burroughs) round out the volume, but it is impossible not to feel the glaring lack of photographic images.

Smith—who in the wake of the brouhaha over Flaming Creatures turned against the notion of autonomous artwork and kept all of his subsequent films unfinished, performance pieces that required his presence at the projection—produced a vast oeuvre of posed still images, some used as slides, that represent his strongest and most formally influential work. Both editors of Wait for Me at the Bottom of the Pool have produced their own books on Smith’s work, books that include pictures. One can only hope that the reissue of this volume (originally published in 1997) heralds, along with Mary Jordan’s excellent 2006 documentary Jack Smith and the Destruction of Atlantis, a resurgence of interest in Smith and his work, which will, in turn, lead to restoration and redistribution of his films and further collections of his photographs.