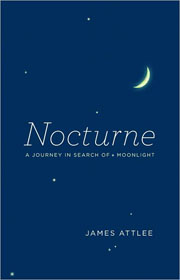 The moon is sort of a cliché, right? Even contemporary poets tend to avoid it. But say, for instance, I become lost one night, does the moon suddenly become more relevant? Or can’t I simply use my smartphone as a flashlight until I stumble my way back to the fluorescent parking lot that contains my car and GPS? In his collection of essays Nocturne: A Journey in Search of Moonlight, James Attlee challenges us to reexamine our relationship to the night sky for the sake of both our sense of mystery and our planet’s health.

A perfect way to read this travelogue/narrative inquiry would be to enjoy a single essay each day as the new moon waxes toward full—it’s roughly the way the twenty-six essays wax in length. Attlee’s loose nod to the form of his subject is pleasing, as is the relaxed raveling of the book’s arguments and images from one essay to the next. He begins in “Moonrise” by stating that “much of the planet we inhabit no longer experiences ‘night’ as it was once understood . . . Most of us . . . are increasingly cut off from the movements of the silent satellite that controls the tides, linked in the human mind for centuries with love, melancholy and madness.” The night, he states, has been “rendered spectrally pale today by the intensity of our self-regard.”

“Some books begin as a random accumulation of ideas, spinning like the debris of rock fragments, ice and gases that follow an impact in space. Gradually, as more material is added, they attain mass and attract more objects to themselves, eventually, as their inner cores cool, achieving solidity. It is thought that this is how the moon was formed.” Indeed this is the way the collection reads, beginning in an English dentist’s chair and travelling from points such as the rim of Mount Vesuvius to a moon-viewing festival in Kyoto to neon-soaked Las Vegas. Attlee provides us with a collage of fascinations. He creates simultaneously a cubist portrait of the moon and of the moon reflecting its audience. Here is the moon beneath which Li Po drank his wine and wrote his poems. Here is the moon toward which Galileo focused his telescopes, the same moon that terrified Mussolini, the same moon Futurist megalomaniac Marinetti wanted to see obliterated with gaslight.

Attlee guides us not only through space but also through time, from earliest mythology to today’s flavor of moon worship. In “From Vegas to Vega: American Moon,” he describes his experience in the Arizona desert where any one of us could, as he attempted to, book time on a platform surrounded by parabolic mirrors to bask in concentrated moonlight.

Ultimately, Attlee’s moon reflects our species objectively: Romantic painter, fascist, poet, distanced family member, fallen soldier, and scientist alike all claim some portion of night. However, taking to heart the number of goddesses associated with the moon who have been worshipped around the globe, the almost complete lack of female observers given voice in the collection is highly noticeable, though this reads as less of an omission on the author’s part than as an illuminating silence. That absence is another facet of the same cultures that Attlee turns a critical eye toward for exhausting the extensive natural resources necessary to wipe out night with technology.

But are we of the increasingly sprawling urban landscape doomed to forego the introspection that the unpolluted night sky allows? Attlee doesn’t leave us with so bleak a fate. “Each generation gets the sky it deserves,” he states, “bequeathed to it by its parents. Distanced and diminished as it is by human brightness, today’s moon demands of us greater attention, a little more effort.”