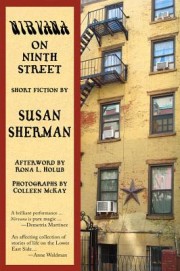 While Susan Sherman’s book of stories Nirvana on Ninth Street is certainly a refreshing and readable volume, a reader might object to it on grounds of truth in advertising. The back cover copy describes the book as a kind of tell-all about Sherman’s neighborhood. Demetria Martínez blurbs it as a text that has “evoked the untamed spirit of the Lower East Side and of the dreamers who live there.” This would make Nirvana on Ninth Street a sort of companion piece to Ed Sanders’s Tales of Beatnik Glory, which traces the transformation of the area from Beatnik stomping grounds to hippie enclave. Truth is, the book is closer in tone to some of Delmore Schwartz’s short stories, such as his piece about a father who retires from a garment factory to become a Lower East Side painter. As with Schwartz, Sherman uses the neighborhood as a setting, not for realistic sketches, but for ingenious parables.

In one piece, for instance, she describes the love affair of Jerald and Geraldine. Jerald “collected people’s faults,” keeping a notebook of his neighbors’ foibles and foolishnesses. He meets Geraldine and she falls for him because she is entranced with the idea of someone enumerating her many weaknesses in a secret diary. Yet blinded by love, Jerald can never bring himself to fill in a single entry on Geraldine. When she eventually learns this, their partnership is over. The story delicately turns on the false expectations people have going into a love affair, which end up determining the whole course of its future.

The framework of the book is that an older character, Rachel, who has lived for decades in the same building on Ninth Street, is reminiscing about the events that have taken place in and around her enchanted tenement. She herself has a bewitched mirror, which does not throw back an exact likeness. When Rachel looks in, “It was as if she were looking simultaneously at a complete stranger and at someone more familiar to her than any image of herself she had ever seen.” Rachel’s memories make for striking stories, proving Sherman is a master at writing adult fairy tales, allegories done in a lapidary style about crushed hearts and roses.