Marcel Duchamp and the Art of Life

The legacy of Marcel Duchamp at the end of the 20th Century found him reigning as a defining figure in the art world whose work cast a far-reaching shadow. At times he played the self-assigned role of trickster and near-charlatan; his mischievous nature came accompanied by both obvious natural talent, displayed early on in his paintings, as well as the savvy intelligence, if not clear genius, with which he navigated his way through the art world’s upper echelons in his later years. His work is less understood, especially in terms of the variety and depth of his various possible intentions, than it is popularly recognized and celebrated as tres chic among art dilettantes. Duchamp’s opacity, as intentional as it no doubt was, remains central to any engagement with his work. 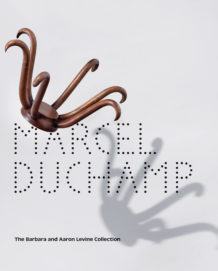 Marcel Duchamp: The Barbara and Aaron Levine Collection comprises a recently promised gift to the Hirshhorn Museum in Washington D.C. The show advances engagement with opacity in the work of Duchamp by way of addressing “a pivotal aspect of [his] practice [namely] his interest in reproductions, specifically making replicas of his own work.” These replicas, all of which are sumptuously treated here with full color photos and extensive commentary, run from singular examples to fairly large editions reproducing work over a period of time or in relation to previous work. The latter is the case with The Bride Stripped Bare by Her Bachelors, Even (The Green Box), 1934, while Comb (Peigne), 1916/1964, is an example of the former.

The Green Box was issued in an edition of 300 with an additional twenty deluxe versions, each featuring “one of the original notes or drawings” of the ninety-three individual “exacting reproductions” which comprise the work. These scraps of ephemera dating from 1911-1915 are in effect the working notes Duchamp kept as he began contemplating one of his best known pieces of the same title, also known as The Large Glass, 1915-1923. In order to reproduce these ephemera at the highest level possible “instead of employing a halftone reproduction process, such as lithography, Duchamp again turned to collotype, a more expensive photomechanical printing process that ensured the reproduction of finer details, particularly handwriting.”

He also insisted on “replicating the unique shape of each note in zinc, which was then used as a template to hand-tear 320 likenesses” printed on “a variety of papers that closely matched those he had originally used.” His intention was for this “album” to accompany any viewing of The Large Glass itself, which he thought “must not be ‘looked at’ in the aesthetic sense of the word.” He hoped an audience would “see the two together” since “the conjunction of the two things entirely removes the retinal aspect,” instead immersing the viewer into the artistic process to thereby create the work anew with each engagement.

Continuing this exchange of roles between audience and artist, Duchamp’s Comb, an everyday “steel dog comb, inscribed along the edge with the phrase 3 ou 4 gouttes de hauteur n’ont rien a faire avec la sauvagerie, which might be translated as ‘Three or four drops of height have nothing to do with savagery’” captures the seemingly sterile challenge presented by his infamous readymades (his most recognized being the urinal signed “R. Mutt,” Fountain, 1917). With these works, as Helen Molesworth describes, Duchamp achieves a central goal:

the viewer completes the work. . . . Duchamp’s readymades, shot through as they are with ambivalence and humor about the problem of work, offer us these enduring lessons: A lot of work goes into making an artwork. Sometimes that labor doesn’t look like work, but it is, and the interpretative acts that give art its meaning, the acts of judgement that bestow value on art, and the complex deliberations that establish what is and is not a work should not be left up to the artist, curator, collector, or critic alone.

Embracing this challenge, the Levines, as the range of their collection demonstrates, have long pursued collecting Duchamp. A most charming inclusion here is editor Evelyn C. Hankins’s interview with the collectors. Aaron Levine demonstrates his informed, if modestly amateur, critical perception regarding the centrality of the readymades:

The readymades are very, very important. . . . It’s thrust. You take a doggy comb and you thrust it up into the sphere of the Picasso and the Rembrandt. It’s the thrust. That’s something difficult for most people to swallow. Well, and also the infrathin. . . . When you shoot a gun, from the time of the bang to the time the bullet leaves the chamber of the barrel, that’s the infrathin. I don’t quite get it. But it’s basically the space between things. And that’s why he liked glass, because there is a space. And no surface. 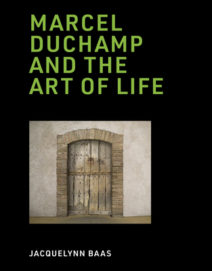 Duchamp himself claimed the “infrathin” was impossible to define and could only be referred to by example, to name the feeling for that flashing awareness of recognition for what’s now but just gone. In Buddhism there is the symbol of the Wheel of the Dharma marking awareness of the constantly vanishing truth of the world around us. In her pioneering study Marcel Duchamp and the Art of Life, Jacquelynn Baas aligns this archetypal symbol with another important readymade, Duchamp’s Bicycle Wheel:

Although Baas doesn’t directly mention the infrathin, this “reading between the lines” serves as a fitting description of it: Naming what isn’t there by pointing to everything around it which remains.

In her enlightening work, deeply grounded by details of Duchamp’s biography, Baas explores new territory for peering into the heretofore unmapped background behind Duchamp’s artistic accomplishment. She unravels numerous spiritual and occult esoteric influences upon his development as an artist dating from his earliest years in Paris and Munich, reading extensively into his some of his earliest figurative paintings; she also exposes the possible role tantric practices regarding sexuality and gender played in the maturation of his outlook, and links up, as well as contrasts, his later work in the 1940s with Georges Bataille’s Acéphale group. While not every reader will be swayed by the totality of her argument, it nevertheless uncovers a number of lasting insights that dispel more of the opaque aura that Duchamp drew around himself. Always at the center of the art world even as he increasingly held it seemingly at arm’s length, Duchamp utilized the keeping of secrets behind his work to further define the mysterious nature of the work.

Echoing Molesworth, Baas closes her book by noting how “the creative act is not performed by the artist alone; the spectator brings the work in contact with the external world by deciphering and interpreting its inner qualification and thus adds his contribution to the creative act.” The imposition of there being a shared responsibility between artist and viewer to define the work of art arguably remains Duchamp’s most significant contribution, ensuring that, as Hankins comments in her chat with the Levines: “He’s the one artists love and he’s the one they have to beat.” Yet while there is no doubt that Duchamp reigns, he does so from beneath layer upon layer of intentionally self-imposed obfuscation—a situation that, despite the successful insights Baas has brought to light, will likely always remain the case.

Eve Babitz, in her 1991 essay “I Was a Naked Pawn for Art,” remarks on the legendary photograph of herself, naked, playing chess with Duchamp while surrounded by a retrospective exhibition of his work at the Pasadena Art Museum in 1963: “I want to be on the cover, immortal, but I don’t want anyone knowing it’s me.” Duchamp would no doubt be sympathetic; he also would likely have rephrased the end of Babitz’s statement to something like: I don’t want anyone knowing who or what I believe myself to be. He was, of course, even more interested in getting his viewers to ask such questions of themselves—hence his continued relevance and the ongoing need for books such as these.