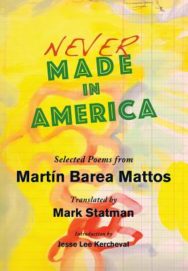 It is the reader who will stand “transfixed / in ecstatic whisper” at the poetry in Never Made in America, written by young-ish (age 40) Uruguayan poet Martín Barea Mattos and translated by Mark Statman. The book consists of two parts—and the original Spanish versions of the poems are included, which adds to the richness. The first comprises generous excerpts from By the hour, the day, the month, a polyphonic, long poem that ends with the lines “God ejaculates at last // at last I’m able to park.” The second part is the entirety of Barea Mattos’s book Made in China, a collection of poems on the theme of consumer society, which ends “I am the message tied to the stone begging you to pay my ransom / . . . Because we are rats of a now-closed lab. / Like stones released in the mountains.” The two parts form a well-translated work that’s not only enjoyable, but also powerful.

In the introduction to Never Made in America, Jesse Lee Kercheval describes Barea Mattos as “the joker in the pack of cards, as the magician, as the Master of Ceremonies at the circus of poetry.” These titles seem to fit. In addition to writing poetry, Barea Mattos is both a visual artist and musician (his band has two recordings under its belt); he also runs an international poetry reading series in Montevideo. His background is non-academic, although he did study for a time at the Universidad de la República. He is a leading figure of contemporary poets in Uruguay, if not all Latin America, and now, with Never Made in America, English-speaking readers can become familiar with some of his best work.

The long poem By the hour, the day, the month is a tour-de-force, a vast panorama of thoughts, styles, and themes. The poem is broken up into smaller, untitled sections that can be distinguished because the typography—font, font size, and/or spacing—changes with each section. The title By the hour, the day, the month [Por hora, por dia, por mes] comes from the customary way garages around the world advertise their parking spaces—available “by the hour,” and so forth.

This part of Never Made in America takes the form of a long collage poem tied together by the poet’s strong voice—or it might simply be called a meditation. Barea Mattos examines post-modern consumerism (his obsession), for example, saying, “the ocean is a wasteland where the television arrived pawning / my grandmother’s jewels” and “for the sneering marketing that decided to spread its message // the one promised in school / ‘we have the right to consume what they teach.’”

In the middle of this, like a meandering river, the poem’s theme sometimes veers towards nature, love, and relationships—in a way that reminds me of Apollinaire’s poem “Zone”—with individual or personal issues mixed up with thoughts about society. In that regard, the poem also resembles Allen Ginsberg’s “Howl” and Ezra Pound’s Cantos. In the sense that we get everything through Barea Mattos’s slightly gonzo but intelligent and honest viewpoint, the poem’s trajectory also resembles the work of one of Barea Mattos’s favorite writers, Jack Kerouac.

In the second, shorter part of the book, the stand-alone Made in China, Martín Barea Mattos conjures up a vast garbage dump that’s an obvious allegorical reference to our consumer society. The work is comical, didactic, unique, and intensely lyrical. Using the persona Carlos Baúl del Aire, Barea Mattos takes us along as he fills his writer’s notebook with poems, explaining that it “will be the COMPLAINT BOOK / of my post-consumption delights.” The resulting Made in China poems are a mixture of cultural criticism and personal material, and they are glorious. Who can resist poems with titles like “I don’t remember how or when or where I murdered my parents” and “There is no form for the lost or bored”? There are many memorable lines, as well; for example, in “Abysmal sea skin whisper,” the speaker laments, “If there were water in the water we wouldn’t die of thirst.”

Mark Statman, the fearless translator-poet of Never Made in America, has been acclaimed for his translation of Federico Garcia Lorca’s Poet in New York (Grove Press, 2008) and is a poet himself whose most recent collection is That Train Again (Lavender Ink, 2015). Statman’s English version of Never Made in America rises to the challenge of capturing the poetic genius of the original. His translation skills are especially showcased when Barea Mattos engages in wordplay, as he loves to do, for example, in the section of By the hour, the day, the month entitled “él.” Thanks to Statman, these major Spanish-language works are accessible to the English-speaking reader, where we can enjoy the translated poems’ sparkle.

Never Made in America is surely an instant classic, and it invites us to get acquainted with one of the key players in South American poetry. In contrast to its title, the poetry inside this book is deliciously homegrown. Read these poems—they’ll feed your mind.