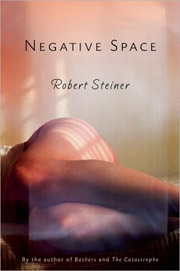 The power of Robert Steiner’s novella Negative Space comes not from its subject matter but from its prose, which offers a kind of lyrical philosophy of loss, memory, and pain; a taxonomy, or rather a “postmortem,” as the unnamed narrator calls it, of his marriage’s dissolution, the failure itself a corpse to exhume. The plot, mundane as it is, may be reduced to the following: a man’s wife of twenty years confesses to an affair, then leaves the terrace—the site of her admission of infidelity—to pack her things, whereupon the cuckold, waiting for her to return to the terrace, reflects on her confession, her betrayal, and the general course of their marriage. But, while it’s certainly true to say that pain, even emotional pain spiked by betrayal and abandonment, is commonplace, the knowledge of its mundanity does not make the actual pain any less painful—cold comfort, as we all know, is an oxymoron, and does little to alleviate any icy knifing of the heart. As the narrator explains:

The narrator’s attempt to see, from as many directions as possible, the sorry state that he’s in, and the imagined state toward which he thinks he will soon plummet, doesn’t bring any kind of resolution, and the repetitions he employs, (as in the passage above, where he runs the word “happen” through a few of its conjugations), reveal his desire for connectivity but also for the insistence, and therefore permanence, of his pain.

James Joyce might have been describing Steiner’s narrator when he wrote: “How you would be thinking in your thoughts how the deepings did it all begin and how you would be scrimmaging through your scruples to collar a hold of an imperfection being committled.” Steiner’s narrator is also often found “thinking of the thinking,” rummaging through the wreckage to find the imperfections of his life and marriage; he is troubled, too, by scruples—those uneasy thoughts and feelings, those hesitating doubts, those uncertainties about principles and duty. And just like Finnegans Wake, from which the above sentence was derived, Negative Space explores, as Joyce in a letter explained, a “state which cannot be rendered sensible by the use of wideawake language, cutanddry grammar and goahead plot.” The state that Steiner makes sensible is not the dream state, but the waking life of a man quaking with loss—a profound state of anxiety, resulting from betrayal and “the dystopia betrayal makes of love,” and abandonment, articulated in sweeping, sensuous sentences marked by orbicular observations, acute analysis, evocative detail, and languid lyricism:

Before ash, rubble, rubble subjected to thought in order to believe that there could be a moment of perfect understanding to explain my wife’s exit. Whether or not, however, afterward comes nothing but ash, not a subject, not the woman I love, only residue. In twenty years of marriage, I have neverinterpreted my wife because I did not need to, or thought I did not. Suddenly, because she was leaving, she would be known to me as variations on the theme of the woman I love, of the woman I cannot help but love, as angles of complexity that rest side by side, explaining to me why or how I cannot help but love her, bringing thought to bear on the love I have felt and continue to feel, introducing anguish into my house. Smoldering ruins can occupy a panorama the way from our terrace I witness the olive grove, and the sea beyond it, and beyond the sea the horizon that cuts it, and beyond the horizon the bleeding sun, but eventually even ruin is nothing but gravity.

The narrator employs a kind of cubist prism to anticipate the “ordeal,” the black hole of suffering through which he thinks he’ll be sucked once his wife has finally left him. These “angles of complexity” enable him to chart the disintegration of his thought to rubble and then to ash, and also the way in which his own pain, the ruins of his marriage, is layered like the perception of objects in the fore-, middle-, and background—if at the same time obscuring the fact that his repetitions, which serve, perhaps, as a mantra, will not enact the spell of return that he desires.

Steiner is an artist of the sentence, allowing syntactic threads of consciousness to spool out and form a tapestry; it is the way in which these sentences flow and sweep that will compel readers to follow this manic albeit measured monologue, a monologue centered on word choices, on silence and darkness, on the universe, on his wife’s nudity, on jealousy, on how memory subsumes desire, on ideas about truth, and relentlessly about the self and the other, the end of the world, the differences between dread and misery, and most of all, nothing, the nothing that threatens to swallow everything up. Take for instance, this characteristic passage:

The postmortem ought to be cathartic, I thought on my terrace in the dark, but it would not be, the way most things that ought to be something are something else. Before the ordeal began, I knew it would not serve a human purpose, even though it would bring human thought to bear on unspeakable emotions, as if thinking could comprehend catastrophe, or as if my catastrophe were natural, an earthquake, a monsoon, instead of betrayal. The ordeal would prolong the dissolution of our marriage, tracing the fatal movements of my relations with my wife, forming and re-forming, and revising, over and over, the reality of twenty years, or what I assumed to be reality. The postmortem would be interminable, but no less destructive, as time passed. As time passed, within the eternity of thinking through the collapse of our marriage, there might be moments of nobility, of mercy, even an authentic poignancy that could redeem the destruction, turning it into destiny, or the delusion of destiny. Since my wife’s absence would become the object of my obsessive thinking because she loved someone other than me, the ordeal would keep our marriage alive, even when I did not realize she was in my thoughts, even if I believed I had finished thinking of her and that the ordeal was finished.

Negative Space is a portrait of paralysis, a study of stasis, an analysis of the anguish felt by the abandoned. Though the prose is, like the narrator’s postmortem, interminable, it’s still pleasurable, forcing us to follow its twists and turns toward some kind of understanding about what may ultimately be incomprehensible and irresolvable. Taking its title from a term in the artist’s lexicon, which defines the space around and between an image’s subject, the novella explores the space surrounding betrayal, that space moving in and out of focus, often becoming the primary focus, as if it were a version of Rubin’s vase, that famous optical illusion where the vase is supplanted by two faces staring at each other. In fact, this book might have been subtitled “Toward a Syntax of Figure-Ground Reversal,” to be placed on the shelf alongside Steiner’s critical work, Toward a Grammar of Abstraction.