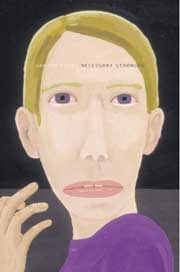 Graham Foust's third collection, Necessary Stranger, begins with "1984," a poem whose very title brings with it a sort of ambiguity. Is the narrator of the poem simply speaking about an earlier time in his life when he came to a sort of consciousness? Is the title a reference to Orwell's novel? Is it maybe a reference to the title track of Van Halen's platinum-selling album? (After all, the next two poems, "Jump" and "Panama," take titles from that album as well.) Or is it all of the above? The pleasure with "1984," and with Foust's poems as a whole, is that such points of reference are often allowed to float freely, evoking a range of meanings without limiting the poems.

As in his previous books, Foust consistently works in a compact form that features often enjambed lines holding close to the left-hand margin, and he employs a terse but carefully chosen vocabulary. Within those basic parameters, though, he explores a number of modes. The title of "Shift Change, The Old Pink. Buffalo, New York," suggests that it is an occasional poem, and in a sense it surely is, but Foust doesn't exactly rely on conventional narrative strategies:

I'll have
whatever shadows

you say
I've been having

for the last
blank elixir

of your unborn
afternoon.

With its off-kilter line breaks seemingly replicating the stumbles of boozy speech, the poem is reminiscent of Robert Creeley's "I Know a Man." (It's worth noting, too, that Creeley provides an extensive blurb on the back of the book.) "Apnea," on the other hand, recalls Rae Armantrout, both in the resonance of its multiple sections and its replication of hazy post-dream landscapes ("Mouth what // hovers above / my face, you hang me awake").

While the poems explore a number of different registers, there is a sense of thematic connection to the collection as a whole. One recurring concept is the suggestion of being one step removed from daily experience due to the influence of various forms of media: in addition to Van Halen references, for instance, there may be shout-outs to alt-rock gods Pavement and Jesus & Mary Chain. While music certainly informs the poems, visual media seem to be what most dictates how the speaker processes reality: in one poem, he refers to "a day like / a day like / television," while another states, "here's to music / to be in the movies to."

All that said, Foust does not shy away from a more direct slice of life. One of the collection's most striking poems, "Summer Camp" presents a relatively straight-forward, static moment. In its entirety, it reads as follows:

ashen. Face was knocked
on into water
over rock.

I am in
a meadow, shitting
feathers.

While the disturbing images that are juxtaposed are striking, one should note, too, the carefully polished sound qualities within the poem, especially in the stanzas before the "I" is introduced. Dispassionate yet humorous, this poem—as well as the rest of Necessary Stranger—goes down so smoothly, the only danger with this book is reading it too quickly. These poems deserve to be revisited and savored.