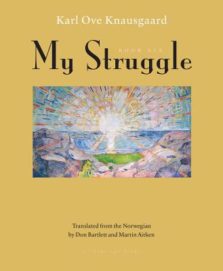 “So much in life is unspoken.” The full impact of this assertion hits the reader with the force of 3,600 pages, this book being the capstone of Karl Ove Knausgård’s six-volume cycle of autobiographical novels. Apprehending and articulating the unspoken ephemera of life is this author’s obsession, and the form in which he dredges it out is a unique blend of diary and realist novel. The resulting commitment to telling exactly what happened, using real names for people and places, has presented no end of controversy and prompted a close investigation of the nature of truth.

So why read a book about the minutiae of some guy’s life? Because he has forged a literary representation for the layers that make up conscious experience. What has, in some circles, been panned as boring, plodding, and mundane is, on the contrary, “the shadow on the soul, the ordinary man’s private little hell, so inconsequential as to barely deserve mention, while at the same time engulfing everything”—an observation which perhaps finds an antecedent in Thoreau’s “quiet desperation.” One may wonder at the literary value of extended passages of drinking coffee and smoking cigarettes, but in the end, Knausgård’s aim is to produce writing “not shrouded in literature’s pall . . . but described in full daylight, swathed in reality.” It is precisely because the moments of epiphany are embedded within the quotidian that we readers are brought within and offered the chance to find ourselves.

We have journeyed with Knausgård through his fear- and shame-filled childhood on Tromøya; through his first glimpse of freedom as an eighteen-year-old teacher in Northern Norway; on to Bergen where he attends a writing academy and enters an alcohol-infused downward spiral; from the defining moment of his father’s death; to his friendship with Geir, and meeting Linda. Now the forty-year-old husband and father of three lives in Malmö, Sweden, embroiled in controversy over his emerging novels. These are, of course, the broadest strokes of the chronology. What brings it all out into “full daylight” are the meanderings, the puerile curiosities, the irrational fears, the procession of amorous blunders, the blind egotism, the addiction, and, above all, the shame. Indeed, it is tempting to circumscribe the novel cycle to a chronicle of shame, but this would be to deny the breadth of its scope.

The turmoil with his uncle Gunnar, who views Karl Ove as a quisling set on traducing the Knausgård name, overshadows this volume. The anxiety of the situation sparks an exhaustive investigation of the concept of a name, and, more generally, the nature of truth. Knausgård is stunned to think that his project may, after all his labor, be compromised. (One is reminded of the controversy regarding James Frey’s A Million Little Pieces.) As other reactions begin surfacing from people from his past who appear in the novels, Knausgård realizes that, in his mind, “the places I had left, and the people who populated them, died away after I was gone. For that reason it had not been them I had written about, but my recollections of them.” This leads him to conclude “the truth of any past situation is elusive, it belongs to the moment and cannot be separated from it, but we may ensnare that moment, illuminate it from different angles, weigh the plausibility of one interpretation against another . . .” If this sounds like backpedaling it is not; he goes on conclusively to state his record of the events in an authoritative and resolute dénouement.

The choice to include the exhaustive 450-page essay “The Name and the Number” in the middle of the novel is bold, but rewarding for the patient reader. One way in which to approach the essay is as the author’s commonplace book, included with his self-proclaimed swan song to illuminate all that consumed him and shaped the now notorious novels. Throughout the course of the essay we encounter a multifaceted Knausgård: the literary critic who parses everything from the ancient Greeks to the Bible to Dante, Cervantes, Shakespeare, Goethe, Hamsun, and Joyce; the philosopher who contemplates the concepts of Relevance, Quality, Memory, Truth, Identity, and Culture; the Longinian aesthete with meditations on the sublime; the World War II scholar; and the memoirist recounting his autodidactic education with an exegesis of Celan’s poetry.

Up to this point in the cycle, little has been mentioned of the work’s provocative title, appropriated from a monstrous figure in whom Knausgård finds many affinities. Building on the dialectic framework from his preceding literary criticism, Knausgård analyzes the language of the Third Reich, using August Kubizek’s book The Young Hitler I Knew, Sir Ian Kershaw’s biography, and Mein Kampf itself as his main sources. Many historical accounts present Hitler as a Messiah to a post-World War I German people under the oppressive thumb of the Versailles Treaty, but the drive to discover the locus of what made unthinkable acts such as the Holocaust possible exposes the degree of political indifference and middle-class torpor of the times. The most prescient and provocative line of the entire effort comes toward the end: “At the same time we know, every one of us knows, even though we might not acknowledge it, that we ourselves, had we been a part of that time and place and not of this, would in all probability have marched beneath the banners of Nazism.” The turn of the screw for this argument is Knausgård’s ability to sit through nine hours of Claude Lanzmann’s Shoah relatively unmoved in contrast to his unshakable sense of belonging (a sense of “we” as he calls it) and the need to take action in response to the mass shooting at Utøya in 2011.

One cannot imagine the pressure of bringing to a close a project so fraught with anticipation, controversy, and pressure. On the one hand, there is an undeniable readership eager for the next novel. But on the other hand, there is a family member keen on pursuing legal action with a libel suit, a wife grappling with mental stability, and a publisher with a deadline. Certainly Knausgård has achieved his friend Geir’s prophecy: “It would be a statement, something there would be no getting away from, Norway’s longest novel.” But not without significant sacrifice: “This novel has hurt everyone around me, it has hurt me, and in a few years, when they are old enough to read it, it will hurt my children.” Knausgård closes the project with a renunciation of his role as writer, and although he subsequently has produced a Vivaldian quartet of books, it will be My Struggle that defines his career and leaves its mark on world literature.