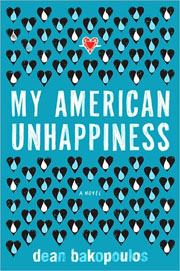 Why are you unhappy? Is it something small, like an unpaid electric bill or an obnoxious television show? Perhaps your job’s a bore or your mother hates you? Or maybe there’s something bigger, some nebulous, draining zeitgeist hanging over the country that’s dragging you down with it? Like many of his contemporaries, Dean Bakopoulos tries to appraise the extent of the country’s psychological trauma caused by 9/11 and the ensuing years of ferocious politics with his latest novel, My American Unhappiness. Like Jonathan Franzen’s Freedom, My American Unhappiness teases out the perspective of over-educated, creative, middle-class liberals—but with a maudlin goofiness and without Franzen’s baggage of celebrity.

Protagonist Zeke Pappas is the day-drunk director at the helm of the Great Midwestern Humanities Initiative, a comically ambiguous non-profit whose sole purpose is to allocate government money to artists. Zeke’s personal obsession is “The Unhappiness Project,” a survey of thousands of people about what causes them distress. The overarching problem, Zeke summarizes, is that Americans have so much heartbreaking information at their disposal but no means of making a better world. “The more we know,” he says, “the more we risk opening ourselves up to this American unhappiness that I speak of; conversely, the more we try to understand, change, or manipulate the political views of our fellow citizens, the more unhappy and weary we become.” People are helpless, neutered of their agency—and that definitely includes Zeke.

While Zeke curates the dissatisfied ramblings of the nation, he struggles to find positive meaning in his own life. He’s constantly on the verge of losing his job, patron, aging mother, beloved nieces, and last chance at marriage. It seems like every corner he rounds he confronts another existential crisis. Waiting in line at a fast food restaurant, he has a dark epiphany. “This is the collective pulse of unhappy America,” he thinks, “right there in the Noodles at six forty-eight in suburban Madison, Wisconsin. These are the people that I don’t want to become. Oh, I think they have beautiful souls, all of that aimless yearning, all of that buried itch—but I know that is where I am headed; if I am not married in time, my own canvas will be a vast tableau of loneliness and banality, and I am terrified.” Zeke, like his 300 million countrymen, has some problems to work through.

Despite its title, My American Unhappiness is archly funny, a mix of deadpan sarcasm, whiskey-sodden one-liners, and over-the-top dramatics—the sort of outrageous behavior that makes you both cringe and chuckle in disbelief that smart people can make such astoundingly stupid decisions. Bad choices and histrionics aside, Zeke is a lovable lost soul. As he fumbles to find happiness in an America abstracted from its citizens, its history, and its ideals, one can’t hide their joy witnessing Zeke finally reconnect with his fellow citizens, his history, and his own ideals—and find real satisfaction in them.