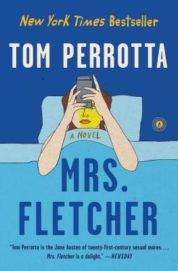 In the first few pages of Tom Perrotta’s new novel Mrs. Fletcher, the titled character, Eve Fletcher, posts a picture to Facebook of her van loaded with new stuff for her son’s dorm room. “So excited and proud. First day of college.” Her son, however, is not in the picture, nor has he helped load the van, nor does he care about the color of the sheets she has picked out. Her aggressively cheery tone in the post is all she has to mark a milestone in her life, the departure of her only child from the home the two of them have shared since the divorce.

When the story switches to the son’s voice, we instantly recognize that casual and unconsciously cruel tribe, the “bro.” His main concerns, if they can even be said to raise to that level, have to do with partying—how he can continue his high school love of drinking, being team captain of whatever sport was in season, and getting blow jobs from his girlfriend who ups her skills by watching YouTube tutorials. His estranged father is proud of him, but his mother is deeply skeptical about his future. Inherent in her assessment of her son is Eve’s understanding of what he has lived through—divorce, and watching his father start a new family. But her son disappoints her from the start by breaking his promise to text her every day. He is drunk on his very first weekend at college, and busy chasing the first girl that presents herself. He is starting a new life.

In fact, many of the characters in Mrs. Fletcher are in search of a new life. Not that there is anything wrong with their old ones, at least not materially. Nevertheless, they can be said to be caught in a uniquely American dilemma, a type of restlessness that will not be satisfied by physical motion. It stems not from a vision of freedom in wide, open spaces, but is instead a quest for themselves, perfected. This is their very birthright. It is advertised to them personally with every keystroke. Their phones are always at hand, checked compulsively, as if any second the answers to all their problems will be revealed. Woe to them if they miss the message.

Meanwhile, her son continues to try to define himself at school. For the younger characters, who are more used to seeing the world through the distorting lens of the Internet, the quest is a little different. In a world where just about any sexual partner (including yourself) can be summoned and made to perform with just a few clicks or swipes, these characters are isolated twice over. They sometimes long for complex and human relationships and yet understand beyond their years how damaging reality can be. Every independent action seems fraught with emotion, and this complexity is hard to process.

Perrotta is an expert at portraying the free-floating anxiety that pervades our lives. An uncomfortable miasma is present on every page of the book. Some might say that this is our post-modern plight. We know exactly how small our own problems are in comparison to the huge issues our world faces. We know we should care more, should do our part to help change what is going on—global warming, sexual harassment, LBGT issues—but isn’t it just easier to drink too much, and regret your social choices? Mrs. Fletcher illustrates in a style both mournful and hilarious, something we know already: “Doesn’t matter where you live. You’re always just kind of alone with your own shit, you know?”