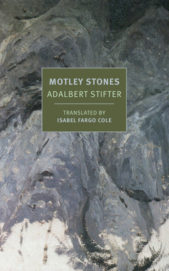 An early critic once accused Adalbert Stifter of being interested mostly in “beetles and buttercups,” poking fun at his apparent lack of great themes. In his preface to the first edition of Motley Stones in 1852, Stifter wrote in reply, “Fashioning great or small things was never the aim of my writings, I was guided by other laws entirely.”  Franz Kafka, on the other hand, famously called Stifter, who was born in 1805 in what is now the Czech Republic, his “fat brother.” Thomas Mann, W. H. Auden, and Marianne Moore have also been among his many admirers. The works of Jean Giono are somewhat reminiscent of Stifter, but overall his uniqueness is almost impossible to explain. For the fortunate reader about to discover him for the first time, Isabel Fargo Coles’s new translation from the German deftly captures the strange rhythm and flow of Stifter’s telling.

Whatever the other laws Stifter was guided by are or were remains a subject of great mystery, for it is almost impossible to say by what subtle technique Stifter enchants us, but he constantly does. Motley Stones is so infused with the deep magic of simply being that it borders on the transcendent, which is an impressive feat for a collection of stories in which people, mostly children, simply wander around the Alps doing things. And yet the world of Stifter’s prose feels eternal and elemental, much like the stones the stories are named for (Limestone, Tourmaline, Rock Crystal, Cat Silver).

In “Granite,” the first story, a boy has had a run-in with the “wagon oil man” and gotten into some trouble with his mother. His Grandfather, in order to console him, takes him for a long walk in the mountains, a walk that passes through all the temporal and geographical history of the region. Each forest grove, each alpine view is imbued with the stories of the lives that have been lived around it. The Grandfather tells the boy of the time the plague swept through, and half the people of the countryside vanished, but a young boy, left alone when his family died, found a young girl sick in the grass, and nursed her back to health. Everything turned out all right. The narrative, simple on the surface, is deftly complex in its shape, rising into the mountains then circling back to the village and to the starting point of the boy’s day, weaving even the wagon oil man into the full sweep of local history.

In “Rock Crystal,” the story most emblematic of Stifter’s style, a brother and sister walk across a mountain pass to visit their grandmother on Christmas, but are caught in a snowstorm on the way back. The simple innocence of the children is set against the brutal threat of the icy mountains around them, mountains that change in shape and character without ever allowing them to find a way down:

But as they walked, they could not tell whether they were coming down the mountain or not. . . .
“Where are we, Konrad?” asked the girl.
“I don’t know,” he replied.
“If only I could see something with these eyes of mine,” he went on, “so that I could get my bearings.”
But there was nothing around them but blinding whiteness, everywhere that whiteness which itself merely drew a shrinking circle around them . . .

One can be tempted to compare Stifter’s work to fairy tales, but there is no “Once upon a time” here; somehow everything is happening right now, and always has been. Each walk or journey passes landmarks that lead us to understand how the past is present in the narrative. And since children are almost always at the center of Stifter’s stories, we’re thinking of the future too, everything happening in an exaggerated fullness of time.

Stifter’s sensibility is pervasively aligned with the natural world, which is always, in its grandeur, its fierceness, and its plenty, somewhat supra-natural. Read today, when beetles and buttercups have a new cache, Motley Stones feels like a new kind of environmental writing. In Stifter it’s the people who are predictable, benevolent, and ultimately innocent. How rare it feels these days to imagine ourselves this way!