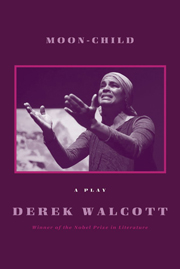 Who the heck reads plays for pleasure anymore? Even for those of us who work in theatre, buying a play and reading it for pleasure is a rare occurrence. After all, a script is an incomplete thing, made up of dialogue on the page, lacking either a production that brings it to life or the dense thickets of prose that novelists use to engage our imaginations. During the brief period stretching roughly from the late nineteenth century to the mid twentieth when general readers were buying plays, exhaustive stage directions flourished in part to compensate for this problem.

Yet the publishing of plays persists, particularly when the play in question is by an important author and unlikely to be seen any time soon. Such is the case with the prolific, Nobel-decorated poet and playwright Derek Walcott’s latest Moon-Child, a play that has, to date, only been seen in readings at the American Academy in Rome and the University of Essex. Moon-Child is so deeply untrendy—with twenty-three roles, at least a half dozen locations, mask-work, frequent songs, and high production costs—that if you want to experience Walcott in fable-spinning mode, the printed page is going to have to satisfy you for now.

Despite drama’s roots in poetry, theatre is now so disconnected from its ancestor that few who read Walcott’s poems seem to know his plays or (particularly) vice versa. Many theatre folk may only recall him as the lyricist for the Mark Morris/Paul Simon Broadway flop The Capeman, a show most famous for introducing Mark Antony to an English language audience. Yet Walcott has been working in theatre for his entire career, and is particularly important to the theatrical communities of Trinidad, where he founded the Trinidad Theatre Workshop, and Boston, where he founded Boston Playwrights Theatre and helped birth a local community of writers.

Moon-Child is, in fact, a musical adaptation of one of Walcott’s previous plays, Ti-Jean and his Brothers, which is now over a half-century old. In it, the devil comes to Earth in the form of Planter, who, as his name might suggest, is a wealthy creole landowner in St. Lucia. His servant The Bolom issues a challenge: whosever can cause the Devil to feel “anger / rage, or human weakness,” will win wealth and peace for themselves and their line. Three brothers named Gros-Jean, Mi-Jean, and Ti-Jean (literally, Big, Medium, and Small John) take a crack at beating the devil. Gros-Jean, representing strength, fails when his anger gets the best of him and he explodes off stage during a dinner party. Mi-Jean, representing smarts, tries to out-argue Planter, and dies after losing an argument with a goat. Finally, Ti-Jean, representing innocence, maybe-accidentally burns the Planter’s house and land to the ground, causing Planter “to vex,” and winning the bet right as his Mother dies. The Bolom, seeing the beauty and pain of human life, asks to take mortal form and becomes Ti-Jean’s younger brother. And they all lived et cetera and so forth.

As the story might suggest, and as Moon-Child says itself, we are in the land of children’s stories here. Twice the Narrator character (played, in both of the play’s readings, by Walcott himself) calls the play a fable, first intoning, “No more money under the table / or ripping off the poor / The moral of this fable / is—Innocence is Power,” and, a few pages later, “in this fable her three sons / pay homage to her [The Mother’s] glory, / as you have heard it at least once, / this simple Creole story.” As in Grimm fairy tales, the characters rarely have names and are pre- (or perhaps anti-) psychological, acting without subtext or subtlety, each standing in for some kind of personal quality or value.

Walcott’s choice to write almost the entire text in rhyming verse, alternating between an ABAB and AABB structure, reinforces the Once Upon A Time vibe even as he injects themes of post-colonial identity and the corrupting force of capitalism into the story. “Power enjoys an ecstasy,” Planter tells us, “that’s actual and slow, / that settles on all it can see / and smothers like the snow- / white flowers in the cedar, / embroidering the ground / with petals with as speedy / a claim and without a sound.” At the same time, Walcott isn’t so serious-minded that silliness—including Mi-Jean’s malapropisms and a laugh-out-loud moment when Ti-Jean “eunuchised” the vexsome goat—are beneath him.

Moon-Child is, ultimately, a quite good and sophisticated work of children’s theater—exuberant in just the right ways, simple without being simplistic, filled with moments of stage magic and narrated like a story book—but it may or may not be completely aware of this fact. Certainly the publisher, who decorated Moon-Child’s cover with a weeping mother straight out of The Trojan Women and proclaims the book “a remarkable new addition to the canon of one of the world’s most prolific Caribbean playwrights,” doesn’t seem to be aware of this. Yet we shouldn’t think it insulting to say Moon-Child would make a great children’s play. Children should learn about colonialism too, and, as we’ve learned from The Children’s Theater in Minneapolis or The New Victory Theater in New York, theatre for the younger set can be every bit as creative, thrilling, ambitious, thematically dense, and artistically ambitious as theatre for adults. Now that everyone from David Mamet to Melissa James Gibson has taken a crack at writing for the younger set, it’s good to see Derek Walcott in their company. Welcome, sir.