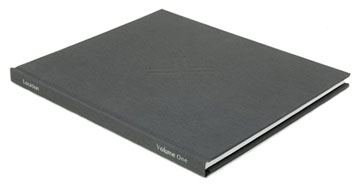 There’s a kind of sorcery involved when you’re swept away by a good book. If the printed words you encounter on the page sufficiently compel your attention and imagination, the book itself effectively disappears, leaving you and the author alone, mind to mind, embraced by the mutually created space of the unfolding story. The sensory pleasure of handling a book you’ve not yet begun to read augments this experience—the soft brush of fine paper against your fingers as you turn the first page, the satisfying heft of a well-bound volume, the gently abrasive rub of linen on its covers. It lends a physical dimension to the frisson of anticipation for the language between the book’s covers that is perfectly suited to the immediacy of the reading experience.

But, what if, rather than words on the page, you were reading images? With their new fine art series of publications, Location Books, Minneapolis-based artists Ruben Nusz and Scott Nedrelow aim to foster the sort of direct connection familiar to authors and readers, but between visual artists and viewers. Through a limited-edition series of artists’ books, the duo hope to offer “a gallery between two covers,” showing artwork created specifically (and exclusively) for presentation in these “unmediated, book-form installations” of art. There are no written blurbs explaining the images you see; there are no titles, no artist statements or framing essays to digest the work for you or to unpack the artist’s relevance or theoretical touchstones. As you make your way through a book in this series, its images unspool before you naked, invested with only the meaning and significance that emerges from the privileged line of communication between you and the artist. 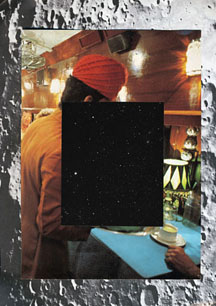 The first installment of Location Books’s new series was just released: the book itself is handsome and well made, but as fits the project’s aim, it’s nondescript. The published piece has no cover art and very little text, just a neutral, charcoal linen cover with a subtly imprinted logo on the front, and the artist’s name and series volume number embossed on the spine. The paper within is heavy, with the feel of brushed cotton, and the production values for the images inside are impeccable, each one reproduced as an archival pigment ink print. Nusz prefers to describe the volume as a collection of “bound multiples” rather than an art book. And, in fact, this series has little in common with the sort of coffee table fine art books you’ll see at the bookstore. These editions are created to be art objects in themselves, not as mass-produced pieces; as subscribers to the series order an installment, they’re printed, individually, on demand.

Nusz and Nedrelow plan to feature a broad array of visual artwork in future editions; some will center on a single artist’s work, as is the case in this first edition, but other installments are slated to incorporate pieces from a number of artists working in variety of media—printmaking, drawing, photography, and mixed media collage. Isa Newby Gagarin, the Minneapolis artist whose work is featured in the debut edition of Location, Volume 1 (Location Books, $100), deftly takes advantage of the possibilities of presenting visual art in this way. Even so, the wordless mode of communication takes a bit of getting used to when you’re accustomed to seeing art installed on gallery walls, conveniently packaged with didactic materials, exhibition catalogs, and take-away postcards that aim to tell you what you’re seeing. The private experience of interacting with the art alone, unaided, is a bit daunting at first. And Gagarin’s images don’t convey a neat, linear narrative. Rather, her story unfolds in small moments of epiphany, observations of repeated motifs and of images mirrored, echoed, and subtly reimagined as you progress through the collages in the book.

Gagarin had an unconventional, “un-schooled” childhood; she was born in Guam and throughout her early years lived alternately in Alaska, Hawaii, Florida, and Texas. She completed her college education in 2008 at the Minneapolis College of Art and Design and has since stayed put in Minnesota. Her body of work, thus far, is marked by playful invention and astute, post-colonial cultural critique. She freely blends public and private spheres, juxtaposing her family’s snapshots with found historical images and vintage documentary photography of the sort we all grew up seeing in magazines like National Geographic. 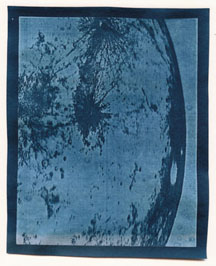 Her collages, by placing these images in conversation with one another, convey a sweeping critique about ethnicity and identity, gender, class, and the vagaries of history, but her rendering of the subject matter is unapologetically subjective. Her pieces offer a magpie assortment of universally shared historical moments and mass-media representations of non-Western cultures and the odd vintage portrait, all filtered through the intensely personal lens of her own story and private fascinations.

Gagarin’s new collages for Location Books continue to explore themes present in some of her earlier exhibitions; these pieces, specifically, feature appropriated magazine images of “exotic” cultures alongside family photos, cryptic bits of advertising copy about manufactured gemstones, photographic lunar studies, and “moonprint” abstractions, which appear as atmospheric starscapes (or diamonds set against a field of black jeweler’s velvet) and that she made by exposing photo-sensitive paper to moonlight.

The visual story she presents is conceptually complex, even cryptic, but it also feels, on a visceral level, coherent, weaving the small-scale human and cosmic threads through a series of repeating images and themes that tie the whole together. It’s as if she’s tracing her own history in pictures, staking her own place in the larger scheme of things, in the context of narratives real and imagined. Teasing that narrative from the warp and weft of the sequence of overlapping images in this collection is stubborn but rewarding business; hers isn’t particularly easy or accessible artwork. But that’s why this is such an effective medium by which to take in her work. Having access to Gagarin’s evocative narrative collages in book form, the viewer has a rare opportunity to abide with her images; these aren’t pieces to pass by on an afternoon’s jaunt to the gallery. With this book-as-portable exhibition you have the chance to revisit these works as only an art collector can. Just as you would settle in with densely plotted novel, you can puzzle through the embedded codes in her tricky collages over time, and allow the shifting meanings and significance of the pairings of images and concepts in them to unfold over repeated private viewings. It’s just you and the artist, mind to mind, in the mutually created space of the story.

About the Artist: Un-schooled as a child, Isa Newby Gagarin grew up in Florida, Texas, Alaska, and Hawaii. Gagarin’s invented, subversive, and playful means of research points to her Altermodern perspective of a world which is equal parts Italo Calvino, selenology, and cultural anthropology. For the series of collages featured in the first installment of Location Books, she explores the moon as a metaphor for photographic processes. Gagarin collages appropriated images from vintage magazines with “moonprints,” photographs she produces by exposing photo-sensitive paper to moonlight. To Gagarin, these images echo the moon itself, an object (when viewed as a flat disk) that she sees as a surrogate for a photograph that is developed by the light of the sun. Gagarin’s previous exhibition history includes installations at Midway Contemporary Art, Art of This Gallery, Rochester Art Center, The Soap Factory, and Synchronicity Gallery in Los Angeles. She was recently appointed to the board of Midway Contemporary Art.

Browse through more images and get additional information about Isa Newby Gagarin in a related, web-only collection of artwork and information at mnartists.org.