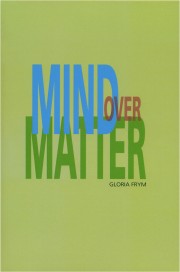 Picture a line of poetry like a knife blade, cutting through the logosphere, laying waste to drivel and mendacity. Picture a line of poetry as a feather, coyly fanning the romantic flames. Gloria Frym wields both lines in Mind Over Matter, a book that is angry, meditative and affectionate by turns. A paean to poetry in its foundational role as a vehicle of social, political, and artistic knowledge, Mind Over Matter owes a debt to Homer and to The New York Times, with a special assist from Jack Spicer and a host of tutelary spirits, from Percy Bysshe Shelly to Joanne Kyger.

In this, her twelfth collection of poetry, Frym opts for eighty centered poems of three to seventeen lines, with the sonnet a frequent form of choice. The centered poem, long in abeyance, has made a comeback in American poetry, and Frym’s use of the form here mirrors the poet’s quest for balance in a world where the poem ostensibly doesn’t “matter.” How does a poet keep writing when language has been coopted by politics, when meaning has been evacuated by theory, and when poetry is often relegated to an academic specialty vulnerable to accusations of elitism?

A poet keeps writing by doing just that: writing. “Poetry never goes away,” or she says in the opening work, “Not remunerative just a record / of living attention.” In this sense, Mind Over Matter, with its explanatory subtitle, A Tribute to Poetry, is a courageous book, one that insists quite literally on the centrality of poetry to the human record by centering the poem on the page. The poem, in this view, deserves respect and ongoing attention—no other medium is capable of transmitting a dense linguistic complex of image, idea, emotion, and music. As the initial poem in the book-length sequence suggests, poetry offers the closest rendition of “mind” that we have available, what Frym calls, “thought’s speech.”

In promoting an ars poetica in Mind Over Matter, Frym set out to write a consciously self-referential book. Lines such as “No poem / Would stand for such a line / A poem is not a fool,” “here’s a lyrical fist,” and “Did you hear the one about the poet and the banker?” are suggestive of her sassy wit, while vocabulary such as “caesurae” and “dangling participles” recalls the early days of Language Poetry, in which references to grammar and linguistics signaled a strategy of deconstruction.

Frym emerged from a mid-century tradition of poetry influenced by the Beats. She looked on but never took up the banner of Language Poetry because, to paraphrase David Wallace on Jack Spicer, Frym loves language way too much. Lines such as “Love’s love love of love” and “Be poetry’s love child / Born of self and a promising lover of words” are too sincere to be associated with poems whose compositional strategies attenuate the poet’s personal identity and emotions. Frym is too playful, too spontaneous, too open to the messiness of experience to be considered a Language Poet, although there is no doubt that she has been influenced by the discourse and practice of her peers.

Social issues are also shared terrain with her generation. Mind Over Matter takes a liberal approach to our blighted social moment, commenting on homelessness (“Housing housing everywhere / And no place to live”), mindless consumerism (“royal blue pantsuit virus”), and the rhetoric of warmongering (“surge is one syllable short of merger”). But it’s language, and the concern of maintaining poetry’s integrity, that is her primary concern. “Let’s move the parts of speech,” she writes, “To where politicians can’t get at them.”

For all the breadth of Mind Over Matter—it is an ambitious, in many ways epic, book—Frym’s love poems anchor the volume, the moments when poetry recounts the intensity of her relationships and human bonds. “She calls the beloved baby // She moans the phonemes bay-bee / Then a sentence heats the room.” In moments like these, she is more John Keats than Matthew Arnold, more Odyssey than Iliad. At a time when the nature of what is “human” is undergoing a sea change of evolutionary proportions, we can’t afford to leave our most poetic moments behind.