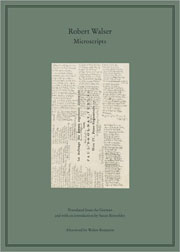 If someone lent you a time machine and asked you to go back a hundred years, make contact with an obscure writer, and provide them with instructions for how to become the perfect literary cult figure for the early 21st century, your best course of action (after, perhaps, expressing surprise that the person owned a time machine, as well as a degree of measured outrage at their disappointing idea for how to use it) would be to go to Switzerland, find a certain Robert Walser, and pretty much let him be himself.

As experienced time travelers may one day confirm, it is difficult for us non-travelers to appreciate just how out of sync Walser was with his own era, as opposed to how comfortable and appropriate he seems in ours. Back then, eccentricity in a writer’s style didn’t count for half of what it counts for today (“eccentricity“ is now the raison d’etre of whole publishing projects), and an indeterminate approach to irony and sincerity was nowhere near the fashion it has recently become. Similarly, at the high water mark of heroic modernism it was surely not a compliment to be called, as W. B. Sebald later called Walser, the “clairvoyant of the small.” But while Walser might have been nearly forgotten during and immediately after his own time, by the 1970s his reputation began to grow appreciably, both in his native Switzerland and outside it, greatly helpedin America by the likes of Susan Sontag. Now, in the last ten years, the Walserian revival in the U.S. has started to kick into an even higher gear.

Much of the recent attention is due to the strength of Susan Bernofsky’s new translations. Walser has been quite lucky in that regard, since the earlier Christopher Middleton translations were also great, but Bernofsky has the torch and is sprinting with it, having recently brought out the first English translations of two of Walser’s published novels, The Tanners (2009), and The Assistant (2007), both on New Directions. With four novels and a goodly number of short stories now in translation and in print (although there are apparently hundreds still untranslated), Bernofsky and New Directions have turned to some of the more obscure works of this formerly very obscure writer. Microscripts, released earlier this year, is a selection of short sketches and treatments very much in Walser’s usual sinewy and suspiciously polite style, written by “your colossally humble servant” who nevertheless demands that we, without fail, be satisfied with him. As becomes abundantly clear in these short works, no one does the direct address with as much faux-or-possibly-not-faux earnestness as Walser, just as no one throws in as many digressive and seemingly superfluous qualifying phrases while still managing to keep the vast quivering bundle of strings from unraveling. The ultimate effect of both these techniques is to foreground not only the emotional vacillation and mannered remoteness of Walser’s narrators, but the vacillation and remoteness of grammar and language in general—a very contemporary effect indeed.

Adding significantly to the curiosity-factor, these twenty-five pieces were originally written in an almost microscopic script that densely filled the corners of envelopes, the backs of postcards and business cards, and the margins of hotel stationary. Since much of that writing was literally too small to read, Bernofsky is in fact translating something that has already been pieced together and to a degree “translated” by Werner Morlang and Bernhard Echte when they resized it to fit human eyes. (It can only be hoped that the Museum of Jurassic Technology in Los Angeles, which already boasts a number of exhibits in the field of the extra-small, is hard at work on a new Walser wing.)

Physically speaking, Microscripts is beautiful and extremely well done. There are gorgeous color reproductions of each piece in its original mundane setting, and the German is kindly made available in the back of the book. Bernofsky provides a focused introduction and—worth the price of admission, as they say—a translation of an essay by Walter Benjamin that once again illustrates why the name Walter Benjamin is spoken on college campuses like a mantra. One of Benjamin’s most memorable observations about Walser runs as follows: “Everything seems to be on the verge of disaster; a torrent of words pours from him in which the only point of every sentence is to make the reader forget the previous one.” In that single insight, Benjamin gets at much of Walser’s appeal: the fascinating tension between each sentence and its predecessor or even, in many cases, between the tail end of a sentence and its own beginning. One effect of such a tension is to slow the reader down considerably, forcing them to read at a pace normally reserved for poetry and/or legal briefs. Despite a lovely vocabulary and a zest for descriptions of the natural world, there isn’t much “flow” in Walser—only a sort of ongoing and perennial struggle to change direction, as if pure vacillation, taken to enough of an extreme, might be able to transcend the limits of expression.

It must be said that Microscripts is, almost certainly, not the best place to begin reading Walser. Despite its many gems, this is a book for the Walser completist, or else for that even smaller subgroup, Those-Who-Are-Especially-Interested-In-The-History-Of-Tiny-Writing. Any of the three novels available in English, or one of the available collections of Walser’s dazzling if almost plotless short stories, would likely be better starting points. The reason has as much to do, again, with the curiosity that is Walser’s style: without the contextual setting provided by even his most threadbare narratives, some pieces can come across as chocolately and baroque. Reading the shorter bits it’s possible to miss the overarching humor and mockery in Walser, and especially the degree to which that mockery is itself an outgrowth of existential misery and solitude. True, Walser’s humor often has obscure targets, so that it is persistently unclear if he is mocking himself, his narrator, or—hold on to your hats—we readers. But after spending time in other Walserian works, you at least learn to detect that the intent is generally humorous, and often in the most quotidian of places. For instance, see if you can find the hilarity in the following sentence, one that ends one of the pieces in this book and will now end this review: “This is certainly a peculiar story, and in any case it has never before appeared in print.”