Mexico: The Revolution and Beyond
Agustin Victor Casasola
Essay by Pete Hamill
Aperture ($50)

Photojournalist? Photographer? Artist? Historians have found it difficult to place Agustin Victor Casasola comfortably within the pantheon of modern photography, due to the vast scope of his oeuvre, the violence of the times and places he covered in his work, and the unabashedly commercial nature of the agency he ran for over thirty years in Mexico City. Casasola is most widely known today for a few portraits he took of Zapata and Pancho Villa, the two populist heroes of the Mexican Revolution. He was also on hand when Porfirio Diaz, the departing dictator, set sail for Europe from the port of Vera Cruz. But scholars and archivists working in the center for photography that Casasola established late in his career have catalogued more than 400,000 images bearing his name. The difficulty of coming to any conclusions about the overall merit of such a corpus is compounded by the fact that many of Casasola's photos were, in fact, taken by other photographers. 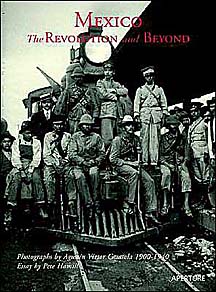 In Mexico: The Revolution and Beyond, we are presented with a choice selection of images from the Casasola Agency, which cover the turbulent times of revolution but also expose the life of the city during its fascinating and awkward coming-of-age as a modern metropolis. There are photos at the race track, and photos of unruly Independence Day celebrations, showing streets jam-packed with men in enormous sombreros; we're taken into dance halls, sweatshops, and "modern" laboratories; and along the way we meet up with snake charmers, riveters, and student protesters. There are bullfighters and society musicians, prostitutes and clowns. The deaths of both Villa and Zapata are represented in gory detail, and Diego Rivera, Leon Trotsky and other notables make an occasional appearance; but many of the images chosen by the editors are generic, as if to highlight Casasola's efforts (following in the footsteps of great European photographers like Eugene Atget perhaps ) to document the life of the city.

As the visual record of a region and an age, the photos in the Casasola collection are nothing less than fascinating. We may have seen similar photos taken in North American cities at about the same time, yet here the costumes, the expressions, the flavor is entirely different. The question remains to be answered, whether Casasola's work actually rises above photojournalism, to reach that level of sober-minded profundity we associate with genuine works of art.

In an informative introductory essay Pete Hamill takes a stab at the question, and brings considerable weight to bear on the idea that Casasola was a sort of genius behind the camera. "His eye often recognized what Cartier-Bresson would later call 'the decisive moment': the way bodies fell after the fusillade, the primeval joy of charging cavalrymen. But he also captured the contrast between the horses of nineteenth-century wars and the railroad trains of the modern era. He caught the bold swagger of the soldadera along with the growing indifference to sudden death."

But a careful look at the photos doesn't convey quite the same impression. After all, anyone who takes 400,000 photos is going to catch "the decisive moment" every once in a while. And anyone who takes a picture of soldiers arriving somewhere by both horse and train is going to "capture" the contrast between the two modes of travel. The most obvious thing to note about many of the photos contained in this book is that they're posed. The war pictures aside, they seldom have the instantaneity of a fleeting event, large or small, that's been captured magically on film. Several images are of the type and quality that often wins photo-journalism awards today—the execution of six counterfeiters, for example, whose bodies can be seen crumbling through a cloud of smoke (which may be a doctored negative.) But more often they display the somewhat crude lighting and the dead-pan expressions of individuals who are lined up in front of a camera. Even the pictures of couples dancing at a nightclub show them, not gliding elegantly by, but frozen in place, their faces turned awkwardly toward the lens.

In short, relatively few of the Casasola images elicit that subtle frisson we experience when a slice of time seems to echo with the mysterious import of all time—but as a tireless exploration of both the dramatic events and the incidental details of Mexican life on every social level, this book is a wonderland of engaging imagery.

The handsome volume Mexico/New York, offers a less robust but altogether more aesthetic vision of photography in Mexico. It reproduces a few of the images that appeared in a show held at the Palacio de Bellas Atres in Mexico City during the winter of 2003. That show, in turn, was a re-creation of a show held at the New York gallery of Julien Levy for two weeks in the spring of 1935. No one knows which photos were on view at that show, though the photographers involved were the Frenchman Cartier-Bresson, the Mexican Álvarez Bravo, and the American Walker Evans. Cartier-Bresson had been living in Mexico, and knew Álvarez Bravo well. All three were exploring photography as an expressive form at the time. The subtitle of the show at the Levy gallery carried the intriguing phrase "Documentary and Anti-Graphic Photographs."

The book itself is somewhat of an enigma, however. Reading the breathy preface by Mexican photographer Mercedes Iturbe, one would be hard-pressed to discern precisely why these works are appearing together. The book itself is printed on thick, luscious paper, but a number of the pages are blank; only thirty-five contain images. The typography is stunning, yet there are also glaring typos here and there. And the photos by Evans were taken in New York City, while the rest of the photos depict street scenes in Mexico. (The photos by Evans included in the original show had been taken in the American South.)

In Roberto Tejada's introduction he refers to "the borderline relation of these three photographers to surrealism," and we might add that they possess only a borderline relation to one another. Cartier-Bresson had not yet reached the point of total inclusiveness and nonchalance that would make him the greatest photographer of his time. The works of Álvarez Bravo and Evans share a more public face and a more classical form, though their chosen subjects lay half a continent apart.

It would be tempting to remove a few of these beautifully printed photos from their binding to hang on the wall, because considered one by one, the pictures are striking; in comparison to the Casasola works, they carry far greater formal strength and iconic presence. On the other hand, much of the incidental detail that invigorates Casasola's best images—the hats, the goats, the dust, the smiling revolutionaries—has vanished. The railroad tracks have lost their trains, and the store-front displays, with their manikins and eerie reflections, have become windows to the subconscious, rather than to the aspirations of a rising middle class.