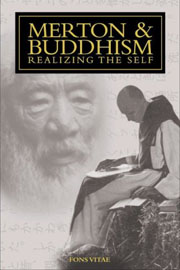 Thomas Feverel Merton was born in Prades, France, on January 31, 1915. In 1941, a Masters Degree from Columbia University in hand, he entered the Abbey of Our Lady of Gethsemani, a Trappist monastery in Kentucky. One would think, as Merton’s friends did, that a medieval monastery would be the wrong place for a young man with a thirst to write, but after an unstable adolescence, the newly converted Catholic had a calling to the silence and discipline of monastic life. Seven years later Merton’s autobiography, The Seven Storey Mountain, it’s title gleaned from Dante’s Purgatorio, was published and became a best-seller. Over the decades, Merton blossomed into a poet, photographer, and literary critic—along with, to the chagrin of the Church, a voice in the Civil Rights and Anti-Vietnam War movements of the 1960s, and a supporter of Liberation Theology in Latin America. At the same time, his spiritual quest, always the crux of his life, expanded to include not only the study of other religions, but the practice of Zen Buddhist meditation.

The story of this amazing man—whose life ended prematurely on December 10, 1968, when at a conference in Bangkok he touched a faulty electric fan—has been told in many books and from many angles. Indeed, Merton & Buddhism, a collection of essays, is one in a series of such books published by Fons Vitae. This one, however, is a particularly valuable contribution to the blossoming field of Merton Studies because atheistic Buddhism, a world religion with philosophically sophisticated texts and meditation practices that center on the nature of reality, has for centuries posed a particular challenge to the supernatural beliefs of Christians.

In 1955, Merton wrote to his friend and publisher, James Laughlin, “Have you ever run across any books by D. Suzuki (I think that is how you spell him) on Zen Buddhism? I am anxious to track some of them down and have them.” D. T. Suzuki, who had had some formal Zen training before arriving in the U.S. as a translator, became the first philosopher of Zen Buddhism to write in English. His books rang with authority, mysticism, and spiritual adventure. In Suzuki’s entertaining stories, monks often become suddenly enlightened; while, in reality, most go through many years of arduous training and only rarely did Suzuki refer to zazen, the sitting meditation around which a Zen monk’s days revolve. Could it be that Suzuki, like many Japanese Buddhist teachers of the time, thought that Westerners weren’t mentally and physically tough enough for Zen’s demanding practice? If so, he made an exception with Merton, who was already used to monastic life. Suzuki and Merton exchanged letters, and in 1964 Merton obtained permission from his abbot to visit Suzuki, who was in New York to lecture at Merton’s alma mater. For Merton, this was an momentous occasion.

Suzuki was familiar with Christianity, especially the apophatic, “mysticism of midnight illumination,” tradition exemplified by Meister Eckhart and St. John of the Cross, which was the path Merton had chosen. In addition, the Zen which Suzuki popularized was made for a Judeo-Christian audience: the stories of sudden enlightenment were his version of Christian grace. In his essay, “The Limits of Thomas Merton’s Understanding of Buddhism,” John P. Keenan writes, “Although Zen was indeed a tried and tattered school of Chinese and Japanese Buddhism, Suzuki and others began to characterize it as transcending sectarian boundaries.” One result of the misunderstanding that Zen can be separated from Buddhism is the voluminous publication of books on everything from business to cooking that use Zen in their title. Even more pernicious is that there is now at least one Catholic priest (Robert Kennedy, S. J., Roshi) who calls himself a Zen Master. Doing zazen, or other Buddhist mediation practices, differs from living the life of a Buddhist, with its insight into the interdependency of all phenomena without Divine intervention.

Merton was a man who made creative leaps and his relationship with Catholicism was as poet as well as priest. Although Christian commentators quote him saying that he would never leave the Church, in truth, we will never know. The beginning of this book quotes him: “I am just beginning to awaken and to realize how much more awakening is to come.” During the last months of his life, he met the Dalai Lama and several Tibetan meditation masters. In his long essay, “Merton, Suzuki, Zen, Ink: Thomas Merton’s Calligraphic Drawings in Context,” Roger Lipsky writes that when he met the Tibetans, Merton “knew that he was among brothers.” Living in the world again, even his preference in Buddhist sects was mutable. The simplicity of Japanese Zen Buddhism, which reflected how he lived his life in the monastery and subsequent hermitage, was morphing into Tibetan Buddhism’s intricate visualizations.

In a book that contributes many essays important to Merton Studies, the section titled “Footnotes to the Asian Journey of Thomas Merton” brings us up to date. For this, Roger Lipsky recently interviewed James George, who was Canada’s High Commissioner in India when he met Merton shortly before his death. George remembers Merton as being “so alive that one felt his humanness and at the same time his sensibility.” He goes on to say: “The breadth of his view was not contained within any cloister or any one tradition. The search probing what it means to be a real human being is beyond that.”