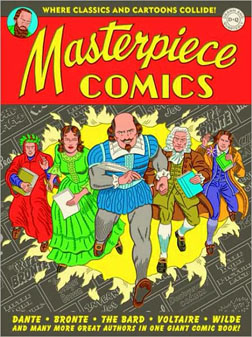 If you go to a used bookstore on the lookout for cheap literary classics, you will inevitably run into 1950s and '60s mass-market paperback editions of such great books as Crime and Punishment, Wuthering Heights, and Macbeth—pocket-sized, priced for the masses, and often with beautiful covers by illustrators like Milton Glaser or Edward Gorey. The epoch that produced these editions—the middle of the so-called “American Century”—was a time of upward class mobility, exploding university enrollments, civil-rights struggles, experimentation in all the arts, and this country’s nearest approach to social democracy. It was also, of course, comics’ adolescent springtime, from the innocent Silver Age of DC and Marvel super-hero franchises to the vivid, censor-attracting nastiness of EC horror tales, from the heyday of Charles Schulz’s Peanuts to the continuing adventures of John Stanley’s Little Lulu.

R. Sikoryak suggests some vital and still-relevant connections between these seemingly unconnected phenomena in his Masterpiece Comics. This odd, oversized volume compiles several years’ worth of Sikoryak’s parodies between hard covers. Sikoryak’s procedure: he chooses a literary classic, usually one recognizably canonical to the average person, and retells it in a letter-perfect imitation of a classic comic book or strip. Like a monk to whom stern physical discipline is spiritual liberation, he carefully observes the rules of the comics he parodies, miming not just their manner, but their material strictures as well—he will, for instance, compress Crime and Punishment into the eight pages of a forties- or fifties-era Batman story from Detective Comics, or hew, in recounting Dante’s Inferno, to the strict three-panels-and-an-advertisement format of Bazooka Joe bubblegum gags. This sometimes works in Sikoryak’s favor and sometimes does not; in general, his parodies succeed most when his chosen comics force him to be brief. "Inferno Joe," the funniest parody in the whole book, extraordinarily captures in its quick succession of gum-wrapper reversals the mordant Dantean logic by which sinners’ sins redound upon them, while the adaptation of Wuthering Heights, done in the manner of an EC Comics horror title like Tales from the Crypt, goes on too long, unfortunately wedding the longueurs of the Victorian novel to those of a wordy ‘50s comic.

Masterpiece Comics also works best when Sikoryak intimates an essential similarity between the two disparate texts he works with. His Peanuts version of Kafka’s The Metamorphosis, "Good Ol’ Gregor Brown," is an act of literary criticism in its own right, reminding us that Kafka was fundamentally a humorist and that Peanuts in its prime circled desperately around themes of loneliness, mediocrity, despair, suffering, and indifference. Not as funny as "Inferno Joe" and not meant to be, "Good Ol’ Gregor Brown" really does amount to a masterpiece. But "Dostoevsky Comics Presents Crime and Punishment" works similarly, setting the Russian novelist’s delirious morality play in the garish colors, crazed angles, grotesque caricatures, and lantern-jawed simplicities of Jerry Robinson or Dick Sprang’s Gotham City. The tones complement each other, Sikoryak implies, and the values differ in degree, but not in kind. At other times, Masterpiece Comics elucidates compelling differences between comic and classic. Camus’s Stranger, for instance, hilariously appears as Wayne Boring’s barrel-chested Eisenhower-era Superman; a series of mock front covers for Action Camus clashes the French thinker’s nihilistic plot against sunny Silver Age superhero iconography to evoke the discord between Existential Paris and a United States grown complacent in the certainties of its postwar dominance.

Sikoryak does occasionally poke fun at the classics themselves. In one of the ‘50s- and ‘60s-style ads that punctuate Masterpiece Comics, a model of the Pequod whaling ship is offered, promising “HOURS OF ADVENTURE, YEARS OF CONTEMPLATION”—a gentle dig at the ratio of narration to rumination in Herman Melville’s great novel. But Sikoryak’s interests and intentions seem to lie elsewhere than in yet another round of simplistic canon-demystifying. The letter columns that Sikoryak also includes in Masterpiece Comics provide a clue as to the ultimate meaning of this collection of affectionate parodies. Generally, the columns feature letters—written, of course, by Sikoryak himself—that ask about puzzling features of the comics we’ve just read, followed by an editorial answer patiently explaining the connection between the classic literary work and the comic's adaptation. The paternalism of the old-fashioned letter column might dismay us ultramodern denizens of blog-world, where no authority can ever hope to explain anything once and for all to a permanently atomized audience of competing interests, attention spans, and maturity levels.

In many ways, this radical electronic democratization certainly represents a welcome change from the too-cozy postwar consensus that produced the Vietnam War, even as it gave us the Great Society and Edward Gorey-decorated mass-market paperbacks of the classics. Still, Masterpiece Comics recalls with some mockery but with greater wistfulness a world where a humanistic education was more easily accessible and more obviously relevant to a wider swath of the citizenry, where Charlie Brown and Gregor Samsa seemed to exist within the same order of significance. Later, of course, an all-consuming commodity culture leveled every value to what the market would bear, often in the facile name of progress or rebellion. Sikoryak deserves credit for having embedded, among his book’s many laughs, serious and difficult questions about what we have lost with the waning of a shared humanism, which—though often hypocritical and open to manipulation by elites—nevertheless held out fragile and perhaps even irreplaceable models for other, richer ways of life. Masterpiece Comics turns out, like Dostoevsky's or Camus's works, to be a drama of ideas.