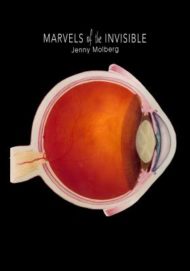 In her first book, Marvels of the Invisible, Jenny Molberg looks through a scientific lens in poems that are both memoirs and detailed descriptions of life forces. Her verse is lush with imagery, and in both her lyric and narrative poetry shows imagination and mastery of craft. This book won the Berkshire Prize from Tupelo Press, and it’s clear on reading the poems why it was a winner.

The title comes from an instruction manual: “With your new Microset Model I, you will discover marvels of the invisible.” In the reverie of the title poem, “My father is six years old. The light / spills in as he bends over the microscope / and folds a single ant onto a plastic slide.” The memoir of her father could end there, but Molberg takes us beyond: “Half a century later my mother’s breasts / are removed.” She and her father walk through the hospital:

through orange-tiled hallways.
He shows me the room full of microscopes.
I imagine his eye, how it descends
like a dark blue planet,
and his breath as it clouds the lens.

Molberg writes with dexterity about the natural world and uses arcane historical sources for inspiration. In “Nocturne for the Elephant,” a pianist plays notes from ivory keys to a zoo elephant: “The song is a downpour / and the elephant begins to pace. The pianist drops / to the low B-flat and, in the base of its throat / the elephant echoes the tone . . . ” The idea came from an 1823 article on the differences between the membrana tympani in elephants and humans. Similarly, “Superficial Heart” is based on a 1798 article about a child born with her heart outside her body. “It pulses in a membrane sac like a frog’s / translucent throat . . . ”

While the poet’s description is rooted in the natural world, she veers toward the mystical in verses lush with lyrical beauty, as in “The Outer Core”: “I am sitting with the moon and we are drinking from the sky. / We break open the earth lake an egg and look inside. / We discover equinox, sulfur, Aurora Borealis.” In fact, Jenny Molberg looks through multiple lenses to give us a picture of the world. She offers the reader microscopic detail—an ant, the inner ear— looks through a telescope to paint the cosmos. Most importantly, she writes with skill, clarity, and sensitivity. This is an excellent first book; readers will look forward to a second.