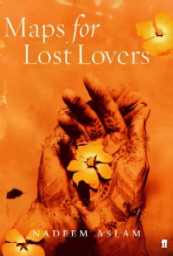 In Maps for Lost Lovers, Nadeem Aslam develops a set of relationships that reveals the ways in which love—often abetted by religion and nationalism—can divide people instead of bring them together. Dasht-e-Tanhaii, Aslam’s stylized community of Pakistani immigrants to England, is "a place of Byzantine intrigue and emotional espionage, where when two people stop to talk on the street their tongues are like the two halves of a scissor coming together, cutting reputations and good names to shreds."

Within this community, the lovers Jugnu and Chanda appear to have been murdered for living together without marrying, and Chanda’s two brothers are the suspected killers. As he tries to get on with his life, Jugnu's brother Shamas must endure the silent scorn of Kaukab, his fundamentalist wife, because he was permissive of Jugnu's lifestyle. Soon, however, Shamas meets a beautiful Muslim woman named Suraya and falls in love. Unbeknownst to him, however, he is being used: she must marry Shamas in order to remarry the husband who drunkenly divorced her one night since, under Islamic law, a divorced couple can only remarry after the wife has married another man.

This plot may appear busy, but over the course of almost 400 pages it proves sparse indeed. Instead, what fills the cavernous pages of Aslam’s book are deep, lyric studies of Shamas and Kaukab and their relationships to Jugnu, the other residents of Dasht-e-Tanhaii, and their three estranged children. Aslam's talent for rendering the complexities of many difficult relationships is substantial, and the more we read, the better we understand each character as he or she develops throughout the novel. It is this that makes Maps for Lost Lovers mesmerizing.

In the book’s first section, Aslam writes that as a young immigrant to England, Shamas's wife Kaukab was so excited at the prospect of learning English that she filled a notebook with “jumbled up” proverbs she had overheard. Aslam presents a list of these, the last of which is “Heaven is other people.” As Aslam explains, “The last she had heard and remembered correctly, Hell is other people, but she had later begun to doubt herself: surely no one—no people no civilization—would think other people were Hell. What else was there but other people?”

Kaukab’s misappropriation of Sartre’s aphorism is emblematic of the greater paradox that Aslam relentlessly drives at throughout Maps for Lost Lovers. Kaukab is a sweet, caring person who would never truly believe that that other people make the world into a hell. For her, relationships are rewarding and fundamental. Yet, unwillingly, Kaukab’s prejudices often create a hellish setting for her friends, her family, and herself. Her rigid fundamentalism and her continual disapproval of the ones she loves send her husband into the arms of another woman and prevent her three children from ever coming home. Although this paradox may be most easily seen in Kaukab, it is no less present for Shamus, Suraya, or many other characters. Tragically, instead of coming together in a time of despair, they make things even more difficult for one another. The question Aslam ponders in presenting this paradox is whether his characters are tragically flawed, simply incapable of doing better, or if they are coerced into such things by their memory of Pakistan and their interpretation of Islam.

Such subject matter may make Maps for Lost Lovers, at times, a depressing read, but it is nonetheless a very worthwhile one. Throughout, the book is buoyed by Aslam’s lovely prose, which is saturated with imagery to the point that virtually no object or feeling is presented without a striking image to accompany it. A slow book that casts a very deep gaze, Maps for Lost Lovers is a thoughtful, beautiful meditation on powerful forces con drive us apart: nationalism, religion, and, most of all, love.