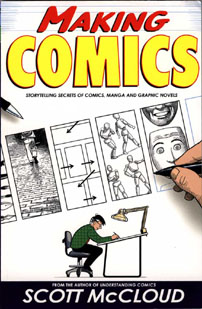 If Comics were a country, Scott McCloud would be that country's representative to the United Nations. He would sit in a blue chair, wearing his red Zot! T-shirt and his green flannel, and he would consider matters of global and aesthetic importance behind those huge, round eyeglasses.

McCloud's comics persona has narrated three nonfiction works about his chosen art form. His authoritative tomes Understanding Comics (1993) and Reinventing Comics (2000) lay out the history, mechanics, and possibilities of sequential art, and they are widely considered to be the most accessible and comprehensive works of comics theory to date. 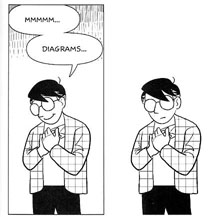 McCloud's third volume, Making Comics: Storytelling Secrets of Comics, Manga and Graphic Novels (Harper, $22.95) gestures at wider topics, referring to the history, theory, and new possibilities for the art form, but for the most part focusing on specific techniques of comics creation.

This is actually a lot of fun, and not just for aspiring comics artists. The book is filled with useful details about tools and techniques (and diagrams, lots of diagrams), but it feels more like a privileged backstage tour than a technical manual.

One reason for this wide appeal is simply charm; McCloud's cartoon-self is as entertaining as he is authoritative, and parts of the book are just laugh-out-loud funny. Another reason is that these "storytelling secrets" are germane beyond the genres in question: any creative writing instructor can use this book to illustrate (literally) individual skills like character creation, scene transition, and the trade-off between narrative clarity and pyrotechnic intensity, even if their students are playwrights and epic poets rather than comics makers. Actors can also benefit from McCloud's description of adult emotions and the extent to which we suppress them. In context, this bit of the book is aimed at artists attempting to draw characters in deeply emotional circumstances, but the lesson is still widely applicable; the best way to cry onstage is to try very hard not to. 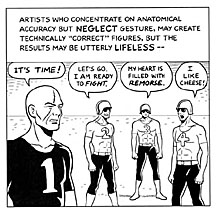 There is, of course, plenty of specificity to balance out this wide appeal. McCloud devotes many pages to frame choices, facial musculature, and the use of digital and traditional drawing tools. Any dedicated comics artist will not be disappointed. But you don't have to make comics (or plays, or epic poems) to enjoy this book. You just have to like reading them.

Let the reader beware, however; this is where McCloud's charm becomes subversive. He doesn't draw much of a distinction between comics readers and comics makers (writers and artists). It's as though the making were just a very active way of reading. The result is that any given reader of Making Comics is likely to put pen to paper herself.

We interviewed two young artists about the effect and influence of Making Comics on their chosen craft. Both are graduate students at the Minneapolis College of Art and Design. Michael Sgier is a printmaker who illustrated his own fiction as a part of his BFA degree, and has recently begun to focus exclusively on comics making. Some of Mike's work is posted online, and printing fees from one of last year's projects continue to haunt his credit card statement. He isn't yet wedded to any particular genre, but his copy of Making Comics is already battered and worn.

"I keep the two-page spread of facial expressions taped above my drafting table, in the studio," he says. "It's been a huge help." But more important than McCloud's technical influence is his ability to inspire.

Chapter 4 of Making Comics encouraged Mike to tackle world-building, the practice of creating detailed backdrops in which to immerse the primary action of a comic. "It's labor intensive," he says, sighing. "Instead of getting on with the story, you spend days and days trying to make the buildings in the background perfect. But I want my worlds to be vivid. European artists like Moebius (Jean Giraud) were doing this decades ago, but you still don't see enough of it in American comics."

There is another kind of world that Scott McCloud is currently building—or discovering, or possibly reinventing. Part of his work as Ambassador of the Comics Nation has been to foster a sense of community and inclusiveness among the makers—and potential makers.

"He keeps up to speed with a very big world," Mike says. "I read his family's livejournal for the big Fifty-State book tour, and they interview all sorts of good people along the way." Sky and Winter, the McCloud daughters, web-cast some pretty adorable "Winterviews" with comics artists. "His enthusiasm is contagious, and he never condescends. He jokes about the difficulties, but there's no scolding in his books. He doesn't go on about how we'll probably fail, and that we'll be poor and starving. We don't need to be told that. We already know." 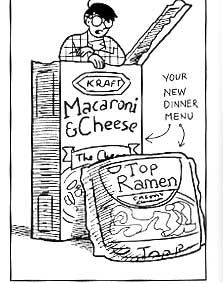 Ursula Murray Husted agrees, and she can back this up with personal experience; she took a course with McCloud last summer, and learned much of the material in Making Comics before the book was actually published. "Scott is very approachable in person," Ursula says, "and very generous to young creators. That carries over into his comics personae. He's approachable, and he's honest in a way that doesn't break you." She pauses, and laughs. "He's also an icon. His cartoon-self is a trusted, familiar figure."

McCloud's Understanding Comics had a more profound effect on Ursula than the new book; she's already one of the converted. "I was twelve when I started reading graphic novels in the Madison public library—which is a great library, and I ditched a lot of school to just hide out there—but it never occurred to me that I could draw comics until ten years later. Comic book makers were golden gods. I never really knew that they were people, and walked among us." As an undergraduate, Ursula initially focused on stagecraft rather than comics. "I always thought I would do theater. It took a long time to realize that I could tell stories, just myself. Scott helped. Understanding Comics kind of blew my head apart. He can turn comics readers into comics makers."

In the second-to-last chapter of Making Comics, McCloud suggests that comics creators tend to cluster around one of four artistic philosophies, or "campfires." He dubs them the Classicists, Animists, Formalists and Iconoclasts, and defines each camp with obvious care and diplomacy. It would be reductive, and probably misleading, for me to sum up the different philosophies here, but I am going to do it anyway: Classicists are dedicated to visual craft, the Animists to storytelling, the Formalists to experimental craft, and the Iconoclasts to experimental storytelling. 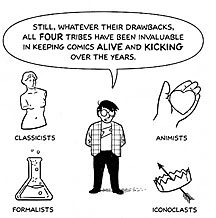 "Scott showed us the idea last summer," Ursula says. "It was before the book came out. We immediately tried to put ourselves in the diagram, and people started saying things like 'Hey look, I'm a Formalist!' Scott kind of panicked. 'Don't do this to yourself!' he told us. 'Don't box yourself in!' He was really afraid that it would be divisive."

If anything, the campfire idea has actually drawn the venom out of ongoing feuds. Ursula tells a story about one such reconciliation between two classmates.

"One drew like an angel (a Classicist), and the other told intensely personal and raw stories (an Iconoclast). They hated each other. But once they established their differing campfire loyalties it all smoothed out. They just said 'Oh, that's why we don't get along!' and stopped trying to convert each other. They're perfectly good friends now.

"We're an ecosystem. We need wild experimentation and traditional perfectionists. We need each other, even if we aren't always on speaking terms.

"The thing that's really brilliant about Scott McCloud is that, even when he isn't inventing something new, he's translating for us, coming up with a new way to express what we've already been doing—and didn't necessarily know we were doing, not until he told us so.

"He's our best ambassador to the rest of the world."