edited by Ammiel Alcalay
The Center for the Humanities, The Graduate Center, CUNY 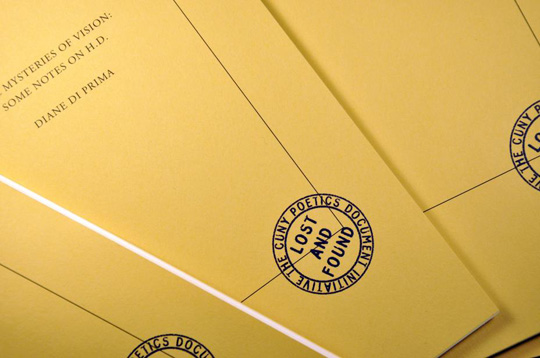 Archival and obscure in nature, the Lost & Found series is one of those rare, eventful joys in publishing history. There is no doubt that decades from now readers coming across these pamphlets will enviously wonder what it was like to have them appear from out the aether as it were.

The project continued in 2011 with Series II:

Followed most recently by Series III in 2012:

And there is a projected Series IV in the works. With individual publications in each series running anywhere from 40-60 pages in length, this represents at present roughly 1,000 pages of essential readings on a wide swath of poets and writers associated with those represented in Don Allen’s New American Poetry, a mix of both predecessors and cohorts.

These are for the most part intimate first-person accounts. Whether they are letters, lectures, or private journals, the editors of each fascicle have located the materials in university archives, often while pursuing their own research interests. This results in terrific pairing of work by writers often at the fringes of academic study with some of the most exciting and promising scholars of the future. Reading through these documents is like turning back a page of literary history while leaning forward to gain perspective on the future of critical engagement. For all readers, academic and creative alike, this is a cherished opportunity to reflect upon both the means as well as the ends of writing alongside factual components of the lived life.

Each set of documents addresses the relationship of the artist to society. For instance, with the Charles Olson memorial lectures, this concern lies at the heart of the event that occasioned each document’s birth. As editor Lindsey Freer notes in her Introduction to Ed Dorn’s lectures: “Collectively, these lectures were one way in which contemporary American poets not only wrestled with Olson’s legacy, but also with immediate political and cultural complexities found in both poetry communities and the nation as a whole.” The letters of Dorn and Amiri Baraka are another instance to be found in these fascicles addressing similar complexity of concerns, as are those focused upon materials from the Spanish Civil War.

Most of all, Lost & Found reminds us how much history is an inescapable fact of the written record, and how readers in the face of any text only benefit from greater awareness of the circumstances surrounding its composition. Having access to the materials gathered in this series deepens our engagement with other works by the artists. Along the way, there are many happy coincidences of timing in terms of publication: reading the correspondence of O’Hara and Koch, there’s mention of Guillaume Apollinaire’s letters to his lover Madeleine Pagès, whom he met on a train as he left for the front in World War I. At the time of their correspondence, O’Hara and Koch could only have been reading these letters in the original French, yet with perfect timing for interested readers, Seagull Books published the first complete English edition in 2010. Similarly, Robert Duncan’s appearances are complimented by the release of his multi-volumeCollected Writings from University of California Press, as Ed Dorn’s are by the publication of hisCollected Poems this fall from Carcanet.

Diane di Prima is arguably the star attraction of the series so far. Her three lectures included here—on H.D., Robert Duncan’s H.D. Book, and Charles Olson—more than adequately prove the case for publication of a collected volume of her own critical readings of peers and influences. In addition to these three lectures, there is assuredly more archival material, from Naropa University and elsewhere, which along with her phenomenal inaugural address as Poet Laureate of San Francisco a few years ago would make for a profound acknowledgement of her lasting legacy. Her accounts of taking LSD with Olson avowedly testify to instances that have gone unremarked within passed-down heritage. Distinctions between literary knowledge, anecdotal reference, and common gossip become ever usefully garbled, re-ingested, and questioned anew. She humorously addresses Olson’s infamous appetite: “Charles tripped lucidly, clearly, after breaking what I had thought were the ‘Rules of Tripping’ by first downing three filet mignon, a dozen corn on the cob and at least one large lobster, and washing it down with two bottles of Mouton Rothschild.” And then goes on to detail the conversation and subsequent events of the following hours.

There are odd elements to this gathering as well, proving an open acceptance over who and what to include has been guiding the work throughout the years. After all, how many readers have considered the small but nonetheless vital discrepancies between Lorine Niedecker’s manuscripts and her poems as printed? Who has taken the time to look at Jack Spicer’s work translating Beowulf? How much attention has been paid to pre-Stonewall era gay culture among key poets associated with Black Mountain College? The innumerable possible spin-offs for further academic study and biographical account which are waiting to be sparked by the available leads in the Lost & Found series are guaranteed to boggle the minds of many readers with anticipatory delight.