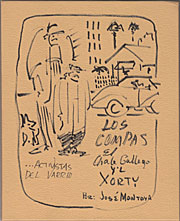 This masterful reproduction of twenty-four original napkin sketches by artist and poet José Montoya tells the tale of El Chale Gallego and “el Xorty,” two dudes from the neighborhood. Printed on letterpress and hand-bound, the book stands five by six inches. The designer, Stephanie Sauer, chose this structure in order to capture an authentic glimpse inside the world of José Montoya, whose memories of childhood and the people who shaped him continue to influence his artwork.

For those familiar with Caló, or the tradition of witty word-play between Spanish and English, the names of the men are meant to be said out loud, so that one hears Chale is really ”Charlie” and also a slang term in Spanish for “no way!” or “get out!” Likewise, “Xorty” is Shorty, with the X signifying an original pronunciation in Nahuatl, a primary language of pre-Colombian societies in Mexico. Chale and Xorty move through the spaces of their varrio, another articulation of the Spanish word for “barrio.” Along the way, they encounter the loyalty of a dog, the love of a woman, good beer, and good menudo. But there’s a point to their aimless travels, and it’s poignantly conveyed by dictionary-style entries printed at the end of the text. Sauer first lists José Montoya, offering a phonetic pronunciation of his name and then a list of its various “meanings.” Next she defines Chale Gallego and Xorty, and poses a deeper connection between their purposeless walkabout and the history of migration and displacement that has historically shaped Latino America.

Regarding the images and their status as ephemera—they are, after-all, napkin sketches—Sauer guides readers on a different kind of reading journey. With minimal text and finely reproduced illustrations, the book does not follow a typical narrative form; rather, in homage to ancient writings such as the codices of Mexico, the story moves from right to left and unfolds on both sides of the pages. The effect is destabilizing, yet special; touching the pages and flipping it over feels like a serious undertaking. It repositions the reader’s attitude toward that everyday José, walking around his neighborhood with no realplace to go.