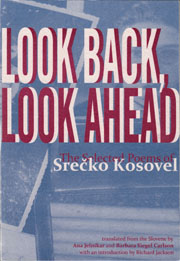 Teens, critics, and undergraduate professors seem preternaturally drawn to the work of those who die young. But brilliance is not the de facto inheritance of the unlucky and the self-destructive. One need not consult a psychologist to conjecture that suicidal youths produce tomes of narcissistic, imitative poetry every month, and that the histrionic mewling of “alienated” suburban youth is far more common than the talented writer who happens to be in the wrong place at the wrong time. And while some shine and die before age twenty-two, others take fifty years to carve out the quiet required by genius. Most importantly, this fetishization of untimely death, whatever the motive, can lead a reader to miss the very best parts of a poet.

Hopefully this will not be the case with Look Back, Look Ahead: The Selected Poems of Srečko Kosovel,though the introduction makes far too much of Kosovel’s early death. Beyond this misplaced encomia, however, one finds an engaging young poet well beyond puerile experimentation. Kosovel undertakes a variety of modes and tones, but his forays are profitable. Further, his topics are not trivial: Kosovel has a startlingly mature political sense. His gravity stems in a large part—as illustrated by Ana Jelnikar’s detailed afterword—from the complexity of his region and times. The poet who, at the age of twenty-one, can describe children of his city, as “old people, unspared / from terrible truths” has seen something of terrible truths himself. This is what makes Kosovel intriguing: not his unfortunate death, but his milieu. Kosovel should be read for the cosmopolitan poetic he crafted between the demands of his studies and those of gnawing hunger, in the midst of Italian annexation and the increasing pressures of Fascism.

While Kosovel has been compared to his contemporary Rilke, he is too marked by his world, too much at the behest of his era, for the naïveté of bourgeois lyric. Over the course of his short life, he carried an Austro-Hungarian, then Slovenian, then Italian passport, officially altering his given name from Felix to Srečko to Felice in kind. “Nationalism is a lie,” he writes, “the League of Nations a lie.” He knew what happened to minority populations caught in the gears of political upheaval.

In Kosovel’s case, the upheaval included his home village of Karst. Is it any surprise that his rural scenes are not benign pastorals, but localized, emotive landscapes?

Behind the church wall
someone is buried.
On the grave a briar blooms.
From the white village, white roads—and all of them lead to my heart.

These landscapes are populated not with caricatures but with family—a family whose language informs his humanism as much as his sense of self:

like a rough hand
that beckons once more
this lost child . . .

This passage is an open rejection of the traditional pastoral and the class politics behind it. When Kosovel writes with melancholy about Karst village, it is not because he is aesthetically moved by the quaint locale, but because he misses it—or fears for it.

Kosovel spent his later youth as a student in Trieste. Once again, in these urban settings, his humanism is apparent on every page. He gives us worldly juxtapositions:

At 8 there’s a talk
on human ideals.
The newspapers print photos
of Bulgarian hangings.

He depicts his petty politic with perfect aplomb:

A barrel of herrings
arrived in Ljubljana.
They were asked
about their political conviction.
They said
they were from Iceland.

He feels hunger: “one thought, one dissonance: Bread.” And he faces the political dangers of literary avocation: “Outside the bright sun is shining. / The detective doesn’t understand / my poem.” This is what—across nearly a century, for half of which his poems remained unknown to most Slovenians—Kosovel brings us.

That he stayed late after a reading, to discuss his work, then missed the last train home, that he spent the winter night on the platform, catching cold and later developing meningitis, is unfortunate, but it isn’t what made Srečko Kosovel. In fact, in Trieste in 1926, there were far worse ways for a Slovene to die. What made Kosovel was his life, the life of a poet engaged and at work, reading, writing, discussing, and hiding away his greatest experiments. Don’t read him for what he lost; read him for the clear-eyed self he offered again and again, in that exhausting art of seeing which is the poet’s one form of love: “Come, you night-wounded man, / so I can kiss your heart.”