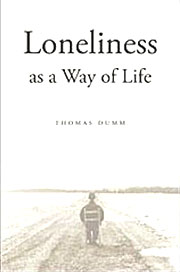 “I suspect that if you have picked up this book, you are asking pertinent questions about what it means to be lonely, and in turn I believe that it is my charge to explain myself to you as fully as I can in order for you to understand how and why I came to think about this subject as I do,” says Thomas Dumm, in a book that references very personal traumas and concerns: the absence of a mother, the death of a wife, the complicity of a former colleague in an oppressive regime, the unbridgeable distance between childhood and the present, and the unavoidable presence of one’s own inevitable death. What Dumm’s book engages deeply, however, are texts—literature, theater, film, essays—particularly of “those thinkers who have mattered the most to me,” those textual friends who have helped keep loneliness at bay and helped make sense of the world in all its seeming emptiness. While we, as readers, are invited into this ongoing communion with the voices of the dead, surely many people who pick up Dumm’s book asking questions about what it means to be lonely will not find comfort in Hannah Arendt’s observation that loneliness “is at the same time contrary to the basic requirements of the human condition and one of the fundamental experiences of every human life.”

“Each one of us confronts an interminable ocean, a place untouchable by others, a language that sounds to us like a scream in the night,” Dumm says at one point, and this claim seems safely universal. What this book fails to do, however, is to express that scream, to articulate even an aspect of its raw, visceral force. Rather than a book about loneliness, Dumm gives us a refuge from it. His philosophical analyses, literary criticism, and psychoanalytical frameworks are, foremost, mechanisms of denial and avoidance; rather than probing his own deep loneliness and speaking to the confounding and agonizing human reality he proposes to address, Dumm anesthetizes himself from this experience via the writing of this book.

Which is not to say that his readings of Thoreau, Melville, or Arthur Miller aren’t interesting; it’s just that in this context they offer intellectual escapism. Take the radical reinterpretation Dumm offers of Moby-Dick: “Ishmael is Pip,” he argues. “It is Pip who alone survives to tell the tale, cook’s assistant assuming the identity of an imaginary seaman.” After his trauma, alone, at sea, Pip’s consciousness first fractures and then regains subjectivity while claiming—and asking the reader to call him by—another name. This is an amusing and bizarre hypothesis, but Dumm’s restatements of certain trends in continental thought regarding absence, presence, writing, and death point more to the absence of the writer from his own, present, work than to any revelations about human existence. “After my wife was diagnosed with cancer but before she died, a good friend suggested that I might not be able to write by drawing upon personal experience anymore,” Dumm tells us. His friends warned that perhaps the “form of critical thinking” Dumm engaged in would simply prove “not appropriate to such a subject.” What seems to be the case, however, is that Dumm isn’t really “drawing” upon this experience, isn’t delving into the realm of authentic feeling at all, but is keeping himself afloat on intellectual currents and novel dips into canonical texts. His reflections on the sadness of the career salesman or on the loneliness inspired by capitalist impulses (both linked to his reading of Death of a Salesman), read to me like the written equivalent of a run he describes, a day during his wife’s battle with cancer when only by noticing the shock on the faces of people he passed did he realize that he, as he ran, was sobbing. In this book, Dumm pumps onward, as if by the very act of writing he can outrun and thus escape his book’s ostensible subject.