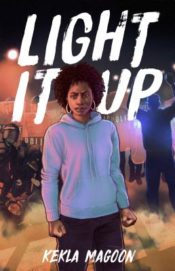 Although young Black people have often been the victims of police shootings, their voices have been seldom heard in young adult literature. Kekla Magoon is part of a wave of writers changing that. Her novel Light it Up follows up her earlier novel, How it Went Down, in which sixteen-year-old Tariq Johnson dies from gunshot wounds. Magoon, who is Cameroonian-American and teaches at Vermont College of Fine Arts, has established herself as a young adult novelist with 11 books including Camo Girl. She’s received the NAACP Image Award, two Coretta Scott King Honors, and was the Kellogg-Hubbard Library Honored Author of 2019.

Light it Up is written in multiple voices, including Tina, Tariq’s sister from the earlier novel. The place, Peach Street, has a voice, reminiscent of James Baldwin’s If Beale Street Could Talk. Peach Street, like Beale Street, is a place where justice seems elusive and futile. Magoon’s fictional Peach Street in Underhill could be Ferguson, MO, or any one of dozens of places where similar shootings have happened.

Shae Tatum, a 13-year-old Black student, is returning home when confronted by a white police officer. She’s big for her age, and she has learning disabilities. With her ear buds in and hood up, she doesn’t even notice the cop, who yells and barely gives her time to respond before shooting her.

Each chapter and character bears witness. “Tina,” “Brick, “Eve,” a “Witness,” and many more give the reader first-person perspectives on the shooting and the community protests that follow. We also hear from community organizers, from a white supremacist internet personality, and from the shooter’s daughter (who’s been ostracized at school in the wake of her father’s actions). Magoon succeeds in giving multiple perspectives without diluting the message that Black lives are being taken needlessly and heedlessly. The many protagonists and perspectives can be hard to keep track of, but this doesn’t detract from the message. Their voices are clear and direct.

There is no closure in this novel, and we are left wondering about the fate of at least one character and of the fictional Underhill. So it is in the Black Lives Matter movement. There has yet been no closure and no conclusion—except that being a Black kid can get you killed.

Kekla Magoon is a talented young adult author who will reach her target audience as well as older readers with Light it Up. Call them personal narratives or soliloquies: These are gripping testimonials to injustice in a community poorly served by oppressive law enforcement. There are times when fiction speaks truth more simply, effectively, and eloquently than nonfiction. This novel is one of those times.