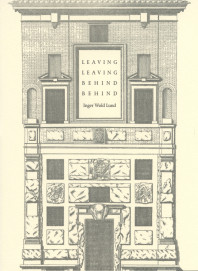 “What is important now is to recover our senses. We must learn to see more, hear more, to feel more.”
—Susan Sontag, Against Interpretation

Inger Wold Lund, a Norwegian living in Berlin, wrote Leaving Leaving Behind Behind in English. A book of poems in the form of a day-book or a day-book written to read as poetry, it offers a duality, a doubleness of language. Take the first poem/entry:

At home. Some weeks ago.

The branches I cut and brought inside grew roots.
The roots were a light shade of pink, like my own
skin. I sucked a finger to see if it would take on the
same nuance.

Of course, it’s possible that none of what is written in Leaving Leaving Behind Behind by Lund is true in the sense that these events actually happened. In “Some months ago. In My apartment,” dust is taking over the rooms; to avoid it, the people drink coffee in the shower and take interviews on the toilet, invoking an eerie naturalness. This theme comes to play also in “Half a year ago. At a store”:

The lady in the store told me the marks on the pumpkin
I had chosen had appeared during a hailstorm earlier
in the fall. Then she asked if I remembered the storm.
I said no.

Last Summer. At the border between two countries.

It was hot. The police wore white hats. In white leather
belts they carried guns. The guns were attached to
their belts with white cords, curled up like the cords
of old telephones. I thought of whom I would like to
kill if given the chance. Of people on my phone list:
One. Maybe two.

Leaving Leaving Behind Behind could be written for a lover, or for a former self. In this way, Lund leaves space in her poems for the reader to enter, and the book grows in our mind, continuing to take its place in an ever-present “after.”