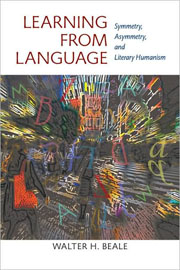 For centuries men have asked whether language has a direct relation (that is, a symmetrical relation) with reality, or whether it is entirely arbitrary and so of no real help in working our way toward real truths and to a better society. Walter H. Beale asks these questions once again and further shows us how these questions lead to even larger ones, such as that of whether there are any stable realities “out there” for us to know. Whether we believe there is an actual reality with which language engages or things constructed from language exist only as conventions, the implications lead beyond simple questions of naming into existential matters, and even to the realms of government, religion, and law.

Learning from Language is in part a survey of how these questions have been addressed, from Plato and Cicero to the rigidly logical thinkers of the medieval period, up to deconstructionism. Beale has a mastery of the entire history of his subject and offers connections that few of us might have made on our own. In discussing the somehow surprising fact that Augustine held with the asymmetry position, he points out that “the rather desolate landscape of a human society without much confidence in either reason or language is one that Augustine shares with some of the most notorious asymmetrists of the modern age, Jacques Derrida and Jacques Lacan.”

Beale rightfully asserts that modern linguistic thinkers generally hold with asymmetry, but he himself chooses to look at the valuable aspects of each position rather than simply hold to one or the other. In the final pages, Beale makes a convincing case for an understanding of language as displaying elements of both symmetry and asymmetry, existing in a state of constant dialectical adjustment: “Specific attributions of symmetry are often mistaken, but the intuition of symmetry is never wholly wrong. The corollary of course is that, while intuitions are never wholly mistaken, specific attributions are rather often wrong.”

Beale’s analyses of ideas—even ones as slippery as the above—are for the most part sharp and interesting. Unfortunately, the clarity of his logic and even his voice are largely lost in the confusion created by the book attempting to be a historical survey, an informational primer, a contribution to the philosophy of language, and more—a progression of jarring transitions and dissonant forms. In some instances ideas are set off like study blocks, with Beale’s discussion following it in a discrete section. Chapters end with “suggested reading” lists. There are charts and diagrams that do little to make the explications clearer and seem fated to become PowerPoint slides.

A professor of English (at the University of North Carolina), Beale asserts more than once that the ideas he looks at here will be valuable to upper-level English teachers, and these seem to be this book’s intended audience. But in the parts where Beale seems to forget that he is supposed to be writing a textbook, it is all too obvious that he clips his wings in order to stay at this arbitrary height.