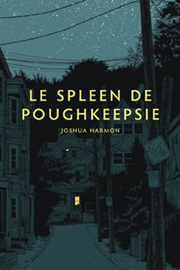 In his essay “Religion as a Cultural System,” the anthropologist Clifford Geertz differentiates between the four major perspectives human beings bring to the world: the religious, the scientific, the common-sense, and the aesthetic. When one views the world via the aesthetic perspective, he writes, “instead of questioning the credentials of everyday experience, one merely ignores that experience in favor of an eager dwelling upon appearances, an engrossment in surfaces, an absorption in things, as we say, ‘in themselves.’”

In Joshua Harmon’s second book of poems, Le Spleen de Poughkeepsie, there is an eager dwelling upon appearances, an engrossment in surfaces: the book is an enactment of Geertz’s aesthetic perspective on life as applied to the ugly—degraded, impure, deeply compromised—surfaces of Poughkeepsie, New York. Beauty, every aesthete’s object of desire, is an exhausted property in Poughkeepsie, a small American city that is home to Vassar and an IBM plant, compromised by the assaults of 20th-century material culture’s relentless pursuit of profit in all its forms. But whereas in the 1840s Charles Baudelaire wrote Le Spleen de Paris in stripped-down prose poems that served, in Walter Benjamin’s estimation, as a tacit acknowledgment of the end of the lyric, Harmon’s spleen goes in the opposite direction; in both free-verse and prose poem forms, he uses lyric’s heightened capacity for beauty to detail Poughkeepsie’s ugliness in defiantly beautiful formulations (e.g., “a diminishment / of light scrolls upward / like a screen flickering from overload or vast / swirls of starlings, errant e-mails caught in / a bramble of downed wires”).

As such, Le Spleen de Poughkeepsie is both marvelously dissonant and unapologetically a reclamation project, in which the possibility for beauty offered by poetry turns it into the only written mode that can both detail Poughkeepsie’s ugliness and triumph over it—however symbolic that triumph may be. The speaker of the poems is a kind of latter-day William Morris, who wrote, in “How I Became a Socialist” in 1894, “Apart from the desire to produce beautiful things, the leading passion of my life has been and is hatred of modern civilization.” Morris, founder of England’s Arts and Crafts movement, which was a direct response to the Industrial Revolution’s encroachments of dehumanizing ugliness, looked at life through the aesthetic perspective if anyone did, and his counterattack was gorgeousness, as is Harmon’s. Both diminish the subject: unlike in Baudelaire, where a speaking subject cries out from among the prose poems (most famously in the exhortation Enivrez-vous! [Get drunk]), the anger of the speaker in Harmon’s book seethes below the surface, its intensity felt far more in the warp and woof of the elegant textures of the poems than in any half-articulate cries. And fittingly so: capitalism has advanced 150+ years since Baudelaire’s encounter with it. Harmon is too smart to believe in the efficaciousness of any subjective self’s outcry.

In fact, there is a deep weariness at the heart of Le Spleen de Poughkeepsie, giving different valence to the title: whereas in Baudelaire the surprise of the not-beautiful English word “spleen” in the French title produced a kind of Benjaminian “shock” that acted as an analogue to the shocks offered by Paris’s new crowds and the Hausmannian restructuring of the city, in Harmon’s title the “shock” is shifted away from “spleen” and onto “Poughkeepsie,” and rests in the ungainliness of the word both as signifier (just ask a non-native speaker to try to pronounce it) and as signified—by what perverse species of bait-and-switch can the “capital of the nineteenth century” be replaced by this insignificant American city? And the wordspleen itself creaks under the tired weight of the recycled—it is linguistic material way past its shelf date, aged through a century and a half of weight in which the processes indicated by Baudelaire have only grown more oppressive.

Morris answered critics who called beauty morally suspect and mere decoration by making a case for beauty as in fact deeply moral, a means by which workers and craftspeople since the dawn of time have brought pleasure to their labor. While the speaker of Le Spleen de Poughkeepsie catalogues the ugliness in Poughkeepsie with a righteousness that has something of this moral fire about it, the book is rendered more problematic—and more interesting—by moments in which he acknowledges that aesthetics might, finally, reveal itself to possess no moral component at all, and that beauty can be as adaptable (and as opportunistic) as the starlings that nest in a neon O at the strip mall. In a pixelated world, new alloys might just have their own nightmarish beauty, and nature can’t help but be complicit in its own stymied eroticism: “meager sun gilds asphalt / briefly and slides out of sight as the furnace / kicks on again.” This stymied eroticism at the heart of the book is also linked to its weirdly depopulated landscape: there aren’t even any hookers on Hooker Avenue, and nowhere does the human offer any kind of solace or stimulation, for the total triumph of commodity fetishism has shifted all emphasis to things rather than people. The few people who do make appearances in the book can lay no claim to independent existence; they feel like the people in Hopper paintings, bystanders to their own lives, flattened out by processes mightier than themselves. Le Spleen de Poughkeepsie’s people are either vaguely threatening (boys who “bang bicycles against rocks / down power line washouts”) or more interested in the poems’ stuff than in the poet: “where an hour past checkout // the landlord collects / the television tipped into / weeds by the back door.”

Harmon is a master at inventing new species of degradation: what could be more degraded than “condominium oaks”? The bus shelter is not even made of glass, but of plexiglass. The goldenrod is browned, rust abounds, the balcony is concrete, “pink tufts of insulation [blow] across trampled grass.” The fantasy of a pure, non-degraded, originary nature isn’t likely to go away anytime soon, and perhaps will only intensify the more we degrade nature (if, of course, we agree there is any such thing). The pink tufts sure are pretty, but can they do the work of roses or peonies (or the native plants the roses and peonies replaced) in the semiotics of landscape? The starling watching from the neon O is doubly degraded, since, as is well known, starlings are non-native to the United States and were brought over by a Shakespeare enthusiast who knew not what he did, causing widespread ecosystem balance. Harmon, however, knows what he did and what we are all doing, despite ourselves. That all said, perhaps only an aesthete living in Poughkeepsie would find it so objectionable. But that is the poet’s argument for the aesthetic perspective, after all: “Beauty is truth, truth beauty.”

Each of Geertz’s weltanschauungen offers itself as the best possible response to the world. Le Spleen de Poughkeepsie, perhaps despite itself, makes a strong case for the aesthetic response as the most representative, as it reacts to the most immediate indication—the visibility—of the world’s flaws. When Harmon writes, in a prose poem, “What future’s not frightening?” one senses the fear is not personal, but is intended to serve as a reminder that, according to the aesthetic perspective, things are headed unstoppably in the wrong direction. That Harmon doesn’t offer us any road out of Poughkeepsie and the early 21st century’s advanced degradation, except for glimpses of “occasional disheveled beauty,” only cements the strength of his use of Poughkeepsie as a metaphor for processes that are unfolding globally, and that are indeed cause for alarm. At the very least, however, those who love beauty can be grateful that its beleaguered state has resulted in Harmon’s beautiful book.