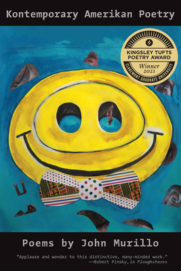 With Kontemporary Amerikan Poetry, John Murillo delivers poems that body-check the landscape of present-day America through a critique of, you guessed it, contemporary American poetry. In this second collection, Murillo is armed with the lessons passed down by his father and the likes of Robert Caldwell—who, “after twenty-something years / stretched across San Quentin, Soledad, Folsom” is a “triple O.G.” He shadow boxes through, reflecting on coming of age and making sense of poetry by acting as a conduit for the experiences and realities of many in the Black American community.

Murillo’s introductory poem, “On Confessionalism,” covers one of love’s most brutal characteristics that often gravitates toward tragedy. In this poem, jealousy—a jealousy that leads to “what a homeboy / said was a Beretta” placed in the mouth of “a man, who was really / a boy, on his knees”—is a precursor to change, as the gun jams and both the speaker and the victim are given a second chance at life. From here, Murillo presents a number of “On” poems (“On Metaphor,” “On Magical Realism,” “On Negative Capability,” “On Epiphany,” “On Lyric Narrative,” and “On Prosody,”), all of which demonstrate his own ars poetica, illustrating the speaker’s engagement with literary concepts through craft and the evocation of memory.

In the middle of the collection, Murillo completes a brilliantly constructed, unconventional crown of sonnets entitled “A Refusal to Mourn the Deaths, by Gunfire, of Three Men in Brooklyn.” Each sonnet opens with an epigraph from a prominent Black voice that both heads and converses with the sonnet to follow. The immense power of the crown is exhibited in its delivery of both diction and content, as it flawlessly merges each succeeding sonnet, providing context that culminates in revealing its purpose in the interwoven fourteen-line stanza finale.

The final section of the collection opens with the poem “Contemporary American Poetry,” in which the speaker meets with other poets at a bar and overhears discussions of congratulation for prizes and the latest gossip within the literary community. All the while, on the muted television screen, another Black youth is murdered and his city set aflame and a woman in Yemen is scorched with acid, a shattering contrast as the speaker is “with the poets. / One of whom—the political poet, / the outsider poet—has brought along / a selfie stick.” This is the contemporary scene of poetry, existing simultaneously within U.S. and international landscapes, where the speaker addresses the unifying and yet fragile climate in which poetry exists: “Everybody, now, squeeze in / tight. Everybody, now, say cheese.”