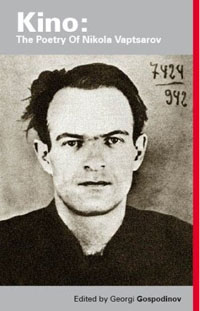 “I consider Vaptsarov my brother in poetry
and struggle.”—Yannis Ritsos

Anticipating the arrival of the latest translation of a poet little known to American readers, I recalled a series of sometimes-coincidental events, only some of which I will relate. I discovered Nikola Vaptsarov’s slender book Nineteen Poems (The Journeyman Press, UK, 1984) nearly 25 years ago while poking around a bookstore, struck by a note on the cover promising an “Introductory poem by Yannis Ritsos,” the monumental Greek Marxist poet. No one I knew had heard of Vaptsarov, a Bulgarian poet executed by his country’s fascist government at age 32 for his involvement in Communist revolutionary activities. The following year, I stumbled upon another rare book of his, this one from a small press in Bulgaria. His modernist and deeply emotive poems revealed a lost treasure connected to a constellation of other poets of social justice: Ritsos, César Vallejo, Miguel Hernández, and Nazim Hikmet among them.

Fifteen years later, I asked a graduate student from Bulgaria, whose thesis I was supervising, whether she’d ever heard of Vaptsarov. Nikola Vaptsarov?! she exclaimed. He’s from my small hometown, Bansko, where there’s even a Vaptsarov museum! I’ll bring you another book when I return from there this summer. What I found in that book (a critical study of Vaptsarov that included a healthy dose of Soviet propaganda) was a rich cultural context for why the Bulgarian people revere him; what I still did not understand was why he remained invisible in the U.S.

I feared that beginning this review with autobiographical details might inadvertently sound self-serving, devouring what little space I had to discuss one of the most tender and personal political poets of the 20th century. Still, I reasoned, Vaptsarov’s work inhabits the balance of the personal and the public as its core motivation—he’d want me to include such anecdotes.

When Kino: The Poetry of Nikola Vaptsarov arrived, I put this rhetorical dilemma temporarily aside, struck immediately by the cover: Vaptsarov’s police photo when he was arrested in March 1942. An evocative fraction focuses the wall, scribbled just left of the poet’s head: 7424 / 942. Did this relate, perhaps, to the number of arrests and deaths of political dissidents? That photo, for me, made his life as a revolutionary, stoker, and factory machinist (the title of his only book published during his life is Motor Songs) and his subsequent arrest and torture (he was hung upside down for long periods and beaten beyond recognition) all the more poignant. As I headed to bed, a further “coincidence” regarding my earlier dilemma occurred. I opened by chance to the introduction’s third paragraph (which followed, I soon learned, the editor’s personal stories of his own discovery of Vaptsarov’s verse):

I began with these stories because it seems to me that poets like Vaptsarov are weaved into our own biographies, they are part of our own bildungsroman. And because, for years, it has been impossible to write in this way about Vaptsarov’s personality and poetry. There were ready, predetermined clichés, ideological symbols, hollow abstractions, worn out similes. The textbooks in literature and the critics’ analyses insisted on presenting Vaptsarov most of all as a monument—enormous, made of concrete, with a raised worker’s hand, devoted only to the Communist Party and the revolution. Vaptsarov’s poetry, thank God, proved to be stronger than its interpretations. Everyone of us could read his or her own, different Vaptsarov—intimate, gentle, lyrical, sometimes desperate, sometimes ironic, “unexpected.”

The biographical stories of others around Vaptsarov, editor Georgi Gospodinov suggests, widen the arc of the struggle for social justice beyond distributing bread to the hungry. What are the dominant modes of discourse, for instance, embedded within our practice of criticism that we might do well to interrogate? Our stories help shape a more approachable Vaptsarov—not just contribute to his legend—enabling a richer understanding of the nature of political poetry and the role of “the personal” in rendering collective action (even interpretive reading) possible.

Kino, though unfortunately slim, includes several of Vaptsarov’s poems that are often neglected, including two I’ve never seen, as well as some of Vaptsarov’s more well-known work, as might be expected in representing a poet with such a brief, yet infamous, career (Bulgarian schoolchildren now recite his poems without fear of reprisal). Vaptsarov’s untitled final poem, completed just hours before his execution and smuggled out of prison, is representative of the poet’s direct style and primary concerns:

The struggle is mercilessly cruel.
The struggle, as they like to say, is epic.
I fell. Someone else will take my place.
That’s all. What does one person matter?

The firing squad. And then the worms.
The facts can’t be denied.
But when the storm comes, my people,
We will be there at your side!

Posthumously, Vaptsarov has become widely revered. He helped usher into Bulgaria a concrete, colloquial poetry that included reference to cinema, radio, technology, and modern culture. His final poems (written during his four-and-a-half-month incarceration), especially, illuminate a marked transparency between the personal and the public, exposing an often-unnecessary dichotomy in which “political” poetry is considered anything but “personal.” Rather than the glorious “workers unite” tone of the final poem, another late poem, “Valediction”—also smuggled from prison and dedicated to his wife—is more intimate, even ghostly, complicating the struggle for social justice in terms of personal loss and regret. It recalls the extreme tenderness of some of the final poems of Miguel Hernández, written to his wife and newborn son (whom Hernández never met) as he was dying in a Franco jail during the Spanish Civil War:

Sometimes I’ll come home in your dreams,
And sit and watch you as you sleep.
Just leave the door upon the latch,
Then in the darkness I will keep

My soft and silent bedside watch,
An unexpected guest, and when
My eyes have drunk their fill of you,
I’ll kiss you, then I’ll go again.

Admittedly, several of Vaptsarov’s poems do not sustain this eerie resonance. Some are doctrinaire, as with the close of “Country Chronicle” (“So I am saying / since cooking oil / is scarce / and our bread is / harder / than our pains are, / our slogan should be: / Stop the terror! / Alliance with the U.S.S.R!”). Such moments stumble toward what must be said by the poet (reminiscent of early Mayakovsky, to whom Vaptsarov is often compared) rather than yielding to the demands of what the poem itself wants to say (an arguably more transformed political vision, as is frequently seen in the likes of Hernandez, Vallejo, Hikmet, and Ritsos). Furthermore, the frequency of end rhyme makes it easy to see why Bulgarian schoolchildren grow up reciting Vapotsarov’s verse, but at times it detracts from the power of his poems.

These awkward moments aside, there is enough fierce tenderness in Vaptsarov to resonate beyond ideology (“No matter how hard you try / It is not a good time for poetry,” and “I pick up the swing of the saxophones / The heat of a woman’s black thighs—”). Even after the fall of Communism, Vaptsarov’s verse survives, its complexity allowing even deeper layers of understanding beyond a state-sanctioned heroic interpretation.

Vaptsarov’s poetry—beyond its literary merit, and its social and historical import—encourages us to consider the nature of dissident writing. How best does a poet address issues of social justice, and what is the role of the personal in political poetry? Does the personal enhance or detract from a rendering of larger social concerns? Can there even be a “collective” without “individual” voice? Moreover, what is ever “individual” about a voice that takes shape within a cultural context? The boundary between such binaries, fortunately, is blurry, and the poems of Nikola Vaptsarov—with their daringly ragged quality—spark us to examine parameters between not only the personal and political, but of other dichotomies as well.