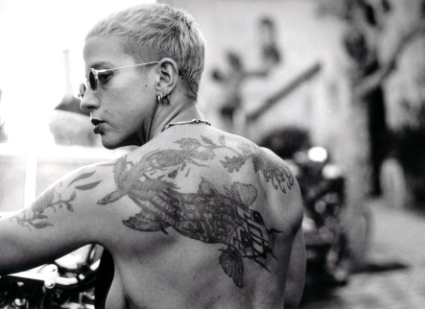 In Tijuana, Mexico, on Saturday November 29 at 1:30 in the afternoon, Kathy Acker, novelist, performance artist, and first wonder of the underground world, passed away at the age of 53. Suffering for eighteen months from breast cancer, and after two mastectomies, she eventually moved to an alternative cancer treatment center, where she fought for the last four weeks of her life. It is not, however, this struggle that we will remember her for.

Born in 1944, Acker was the child of German-Jewish parents, who lived on New York's ritzy Sutton Place and made their money in the glove business. Despite a trust fund that helped to support her, life there was far from easy. Her father abandoned the family just before she was born and her mother took her own life thirty years later. At eighteen, Acker left the house and supported herself by becoming a stripper. It was around this time that she began writing. In her first book, The Childlike Life of the Black Tarantula by the Black Tarantula, she began an investigation that would continue through the rest of her work, writing, "Intention: I become a murderess by repeating in words the lives of other murderesses." It was her desire to bring to life the fluid and political nature of identity.

In her most famous book, Blood and Guts in High School, she describes the main character's father as her "boyfriend, brother, sister, money, amusement, and father." The reader must move wildly around as the characters become different people, or simply show the different people they are. Her characters, not unlike Gertrude Stein's, twist themselves, through strange repetition, into new ways of being. In an interview with S. Lotringer she spoke of her world as both mythical and modern, "In my world people don't even remember their names, they aren't sure of their sexuality, they aren't sure if they can define their genders." It is not confusion, but complexity, and in life she played on these borders as well, her gold-toothed grin and leather jacket making its way through contemporary philosophy as easily as San Francisco sex clubs.

Criticized and censored for her experimental nature and the incorporation of other writers' texts into her work, she explains, "What I'm doing is simply taking text to be the same as the world, to be equal to non-text." "I wanted to explore the use of the word I . . . So I placed very direct autobiographical, just diary material, next to fake diary material. I tried to figure out who I wasn't." She believed in words and in the text's limitlessness, its ability to live beyond the control of its creator. While this did not win her many friends in staid literary circles, she did excite a community of artists and philosophers who had already begun to tackle issues of appropriation and subjectivity.

In her last years, her ambition to "understand the fullness of what it is to be human" did not waver. She left San Francisco to be with a lover in England, went on tour with the Mekons (who had made a companion CD to her book Pussy, King of the Pirates), and even wrote an article about her cancer experience called "The Gift of Disease." Her long obsession with body work (specifically weight training) turned into a quest for alternative cures, and though this quest has tragically ended with her passing, it is this unceasing curiosity, this determination to push her own fiercely personal work deeper, that will live on and continue to challenge everyone who dares to pick up her books.