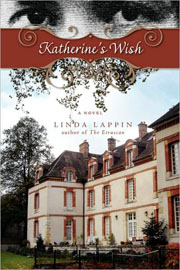 Many literati recognize Katherine Mansfield’s name but are fuzzy about her context and accomplishments. A New Zealand native, Mansfield is lauded as one of our language’s great writers of short fiction. She had ties to the famed Bloomsbury Group active in London in the early 1900s, a collection of artists, writers, and other English intellectuals who demonstrated a bisexual freedom ahead of their time.

After twenty years of fascination with Mansfield, and fifteen years of active research, Linda Lappin confidently expands our knowledge in her latest novel, Katherine’s Wish. While the relationships, events, and inner musings of the characters are fictionalized, Lappin has built on textual evidence from journals, letters, and diary entries in order to adhere to “an overall sense of truth” which she renders as her own mosaic. Her writing style, with its rhythm, flow, and sensual detail, richly evokes the significant social scene of a vanished era.

Katherine Mansfield was deeply committed to achieving excellence at her craft. In one section, propped on pillows in bed, she scribbles a ditty about her absent husband—“Who’s the man as cold as stone / to leave a wife like you alone?”—and concludes that her only solution to loneliness and disappointment is to write:

She must not hold back out of false modesty or propriety. She must tell all; she must deposit her few grains, her residue of truth. She must not fear that friends or acquaintances might recognize themselves in unflattering portraits . . . . It was not their personalities . . . she wanted to describe now, but rather types, situations, conditions of existence in which anyone . . . might recognize themselves, if only for an instant. There was nothing personal about it.

Despite loneliness, growing illness, and physical disability, Katherine perseveres. “The valve would open to release a rush of words like water from a long-trapped spring.”

Set against the backdrop of war-torn 1920’s Europe, the three main characters are fully realized: Mansfield, the consummate artist, willful, critical, and obsessed; her self-satisfied, priggish, and adoring husband, British literary critic John Middleton Murry; and Ida Constance Baker, Katie’s plodding devotee and handmaiden since they were schoolgirls together. Leonard and Virginia Woolf, D. H. and Frieda Lawrence, and other notables appear as social intimates.

Like any writer worth her salt, Linda Lappin never gets in the way of her characters fulfilling their destinies. The book probably could have included more about Mansfield’s background to help bridge the unsettling disparity between her father’s wealth and her own financial situation, which often leads her to despair and degradation. But Katherine’s Wish is first and foremost the compelling story of an artist fighting against time. Long after the last page, thoughts of her linger like an exotic scent, as if, anticipating other guests, she simply stepped from the room to display a vase of flowers or a platter’s mounded figs.