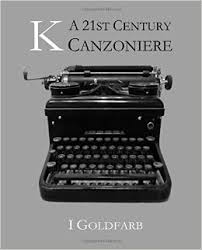 I Goldfarb’s K: A 21st Century Canzoniere is a marvel, with all the deep roots of that word (“to wonder at, be astonished”) still living there, squirming around. For one thing, there hasn’t been a book like this in quite a while—it contains 590 love poems, many of them classic Petrarchan sonnets dedicated to a student a good fifty years younger than the poet. Modeled on Petrarch’s Canzoniere, which was written almost 700 years ago, Goldfarb’s 21st Century update is an epic spiritual love poem in the age of online dating and televised courting, an age in which the cynicism about love grows exponentially in relation to its commodification and use. It is “a chocolate paradise of two” that leaves us marveling at its extraordinary accomplishment.

Petrarch’s book was unique. Often identified as the “father of Humanism,” Petrarch approached his relation to Laura, the object of his poetry, as a man in love caught between carnal desire and awe at her purity. No divine vision, a la his predecessor Dante, flowed from that. Instead Petrarch gave us the anxiety of mortal love and desire, the human drive/capacity that was first seen as ennobling and defining and has gone on to become a major, if not the major, commodity in late capitalism, the stuff of every pop song ever written as well as the most powerful marketing tool ever invented.

But there has always been more to it. Commenting on Dante, Giorgio Agamben proposed that “Beatrice is the name of the amorous experience of the event of language at play in the poetic text itself.” That is exactly what Goldfarb gives us; written at the other end of that 700 year run of humanism, K: A 21st Century Canzoniere introduces a different order of thinking/music to an old order of poetry and thought. It is the difference, say, between a world that accepts a poet’s erotic dedication to a thirteen-year-old and a world that would throw him in jail for it. Goldfarb’s Canzoniere implicates us in its measure of that difference through the continuous production of modulating sound, prosodic compositions which soar from the banal to the sublime. The poems vary between iambic pentameter, iambic tetrameter, common measure, fourteeners, and occasional eruptions of free verse. Canto 14 is an example of the strangeness of the tetrameter which ought to be trite but manages to propel us through a consideration of Agamben’s “poetic text” to an experience of “paradise”:

Goldfarb gives himself over to the energy of this unlikely relation, which leads to a kaleidoscopic “language event” formed out of successive arrangements of moods arising from the formal provocation of the tradition and the impetus of the emotional rollercoaster as it catapults toward its inevitable end through laughter, awe, and tears.

Through it all, Goldfarb maintains a constant recognition of the complexity of the mystery of writing that goes hand in hand with the complexity and mystery of this unlikely love, even in the midst of his reclamation of forms that are no longer active in most poets’ toolbox. But it is 2015, and sublimity is catch as catch can these days, a fact Goldfarb notes in often self-deprecating humor, at once both ruthless and tender in its seeming naiveté. Canto 21 begins, “If I had my druthers / I’d write for no others / writing in adoration / is my Bronxian vocation.” Rhyming “druthers” and “others,” and shifting from two six-syllable lines to a seven-syllable line to an eight-syllable line creates an experience at once awkward and honest. “Druthers,” drawn from comic strip dialogue, locates us a world of the common that ought to be the antithesis of love’s kingdom, but turns out to be our genuine measure. To then go on to rhyme “Petrarch” with “ballpark” is above and beyond the call of any poem, but Goldfarb does it with panache, as he weaves his marvelous love poem to its conclusion.