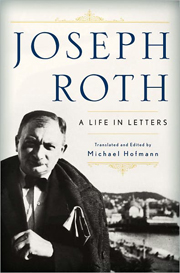 Lars von Trier’s latest movie, Melancholia, is a study of how different personalities respond to catastrophe—literally the end of the world. I was reminded of the film while reading Joseph Roth: A Life in Letters, edited and translated by Michael Hofmann. Roth, one of the finest German-language novelists of the 20th century, was inept at handling everyday matters. Depressed and alcoholic, he comes across in his letters as self-pitying, needy, manipulative, and sycophantic. Yet when Hitler rose to power in 1933, Roth understood the consequences of this event with greater clarity than many of his peers. As he wrote to his friend and benefactor Stefan Zweig, “The barbarians have taken over. Do not deceive yourself. Hell reigns.”

This wasn’t the first end-of-the-world experience for Roth. A Jew born on the eastern edge of the Hapsburg Empire, he served in the Austro-Hungarian army in World War I and developed a strong sense of patriotism. “The most powerful experience of my life,” Roth said, “was the war and the end of my fatherland, the only one I have ever had: the Dual Monarchy of Austria-Hungary.” After the war, Roth began his writing career. He became one of the highest-paid German journalists, and his work led him to travel throughout Europe. Roth was essentially homeless well before he fled Berlin in 1933, a condition he shared with most of his fictional protagonists.

Roth said that if he were a publisher, his motto would be, “Books with practical occasion elevated into the poetic sphere.” The phrase “practical occasion” seems to signify realism—Roth rejected the formal experimentation of Modernists such as Joyce and Proust. He has sometimes been compared to Tolstoy, both for the breadth of his social vision and the vividness of his prose. But he was probably more influenced by Flaubert. Often in his fiction, precise descriptions veer off into figurative language that heightens the verisimilitude of a scene but also gives it a hallucinogenic quality. Here is an example from his masterpiece, The Radetzky March:

The church, with its shingle roof, stood in the middle of a little graveyard, surrounded by slanting crosses, which seemed to sway in the moonlight. Before the high, gray, wide open churchyard gates three corpses were strung up—a bearded priest between two young peasants in sand-colored smocks with rough raffia shoes on their motionless feet. The priest’s black cassock reached to his shoes and, from time to time, a night wind stirred them so they swung against the round edge of the cassock, like dumb clappers in a soundless bell, which, though no sound came, appeared to be ringing.

The passage describes an incident in the first days of World War I; the metaphorical bell tolls the death of the Hapsburg Empire.

No writing of this quality appears in Roth’s letters. Michael Hofmann introduces his collection with a sort of apologia, admitting that the surviving letters “have little bearing on [Roth’s] literary output, and are not even addressed to the people who mattered most in his life.” In the absence of a biography in English, Hofmann hopes that the letters will give readers a sense of Roth’s chaotic life and help us understand the circumstances in which he wrote. Roth is indeed a fascinating, complicated figure, and no one has been more devoted to restoring his reputation than Hofmann, whose section introductions and footnotes provide valuable information. However, too many of these letters would be of interest only to Roth scholars, most of whom could read them in the original German.

The heart of the book—Roth’s exchanges of letters with Stefan Zweig—would make a worthy volume if they were collected on their own. (It would be tempting to reuse the title of Zweig’s best-known work, Beware of Pity.) Like Roth, Zweig was an assimilated Austrian Jew, but their temperaments were very different. Independently wealthy, Zweig was a pacifist during World War I, and he achieved international fame for his writing in the 1920s and 1930s. Roth first wrote to him in 1927 to thank him for praising one of his books; they did not meet in person until two years later. At first, Roth just complained to Zweig about his overwork, financial problems, and personal crises (his wife was institutionalized for schizophrenia.) Then he began to ask for favors, including loans that he failed to pay back. He often accompanied these requests with expressions of self-disgust: “Any friendship with me is ruinous . . . You have no idea how dark it is inside me. My dear, admired friend, you have the grace of luck and of true golden joy in the world . . . Basically, you don’t like people like me; and quite rightly: because they harm you.”

The Nazi takeover of Germany made Roth more dependent on Zweig but also more domineering in their relationship. Roth condemned anyone who compromised with the Nazi regime. Zweig went into exile in London, but he resisted attempts to draw him into the political opposition, and he tried to remain with his German publisher. “You may be smart,” Roth warned, “but your humanity blinds you to others’ wickedness. You live on goodness and faith. Whereas I have been known to make sometimes startlingly accurate observations about evil.” Roth even threatened to end their friendship, despite his indebtedness to Zweig: “there will be an abyss between the two of us, unless and until you have finally and innerly broken with Germany.” The matter was soon resolved by a new German law that invalidated all contracts with Jewish authors.

Roth occasionally offered astute criticism of Zweig’s writing, softening him up first with flattery and then dissecting his weaknesses. Roth was a better writer than Zweig, which both of them recognized, and he continued to write well until the end of his life. Yet rather than gaining comfort from his work, Roth sank deeper into depression and alcoholism. Zweig’s advice to quit drinking and get his finances in order often aroused indignation: “And I tell you now, with the justification of the condemned friend that you are unfair to me, unfair, UNFAIR!! —You do NOT have the right to judge me. . . .” In other letters, Roth groveled: “Please, please don’t forsake me! Don’t take anything here amiss! Picture me lying flat out on my deathbed. Forgive me.”

Zweig, amazingly, did not forsake Roth. As Roth raged against publishers he felt had betrayed him, Zweig began to fear he was losing his sanity, but Roth insisted there was a moral logic to his unreasonable behavior. Citing his World War I experiences, he wrote: “even then, in the trenches, staring death in the face 10 minutes before going over the top, I was capable of beating up a son of a bitch for claiming he was out of cigarettes when he wasn’t. The end of the world is one thing, the son of a bitch is another.” As it turns out, Roth’s cynicism was often a surer guidepost than Zweig’s idealism. When Zweig complained in 1938 about an Austrian publisher who mistreated him, he seemed to forget that four years earlier, Roth dismissed the publisher as a “little twit” and chided Zweig for his “‘blind’ holy credulity.”

Roth died from symptoms of alcoholism in the spring of 1939. It is said that he purposely drank himself to death, but there is something curiously life-affirming about Roth’s despair. Just before his death, Roth rejected Zweig’s claim that their situation was hopeless, and he characterized him as a defeatist. Once again, his perception was astute: Zweig eventually moved to Brazil, where in 1942 he committed suicide, unable to endure his comfortable life in exile. By the end of the collection, one comes to realize how dependent Zweig was on his extraordinarily needy friend. In one of his last letters to Roth, he wrote about his “deep need to sit with you again, to talk things over, and above all to hear about you and your work. I know nothing of you, and I don’t want to lose you.”