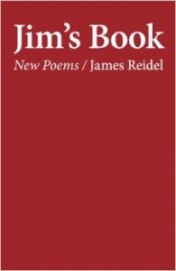 This chapbook, briefer than a will o’ the wisp at only twenty pages, contains poems not at all what one might expect from a more conventional practitioner. James Reidel obtained his MFA at Columbia University over three decades ago, wrote a highly respected biography of poet Weldon Kees (Vanished Act, Bison Books, 2007) and has gone his own way ever since. In this sense, the tradition of John Ashbery and to some extent Peter Klappert finds renewal in Jim’s Book. The value here is in letting the poem work its way into one’s consciousness via extended, sometimes jarring metaphors. While all may not be revealed, the suggestions are there—and that’s enough.

What may seem droll and ordinary to some is a matter of speculation to Reidel, as he plumbs the motivations and aspirations of those he sees but does not know well. Here are the opening and closing lines of “Amish Children at Baseball:”

In such a poetry, the nuances are many times the inverse (or at least the opposite) of what you might normally think. For example, to leave out mention of the unpleasant or the aggravating is—in Reidel’s lexicon—missing the point. Bring it all in! The beginning lines of “Corn Pie, Ephrata, Penna” attest to the poet’s inclusiveness as a style:

A bed-and-breakfast serving no breakfast,
Just the bed, the shower, its jigger glass head
Forcing me to take a sip of the oil and salt face
Projected all night atop the others in my dirty pillowcase.
The plastic curtain billows before my hand.

What is worthwhile here is the sum of the world’s disconcertions; omit them and you’re living in a dream world that doesn’t exist. James Reidel’s verse is an honest, refreshing refutation of the notion that certain parts of reality don’t matter. This poet might surprise as you dip into his world.