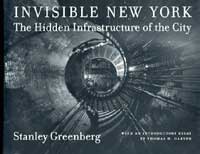 Invisible New York presents architectural photographer Stanley Greenberg's photographs of the city's service spaces—places unknown, if not unimaginable to most, and seen by almost no one. As far as 650 feet below the streets of New York are twenty-foot-diameter water tunnels, controlled by enormous valves in cavernous adjacent chambers. A Lunatic Asylum, dating from 1839, crumbles roofless on Roosevelt Island. On Hart Island, the Bronx, are Nike missile silos abandoned in 1961.

Greenberg—who, before becoming a full-time photographer worked as a civil servant in New York City—reveals an appreciation for the shabby splendor of such service places that could only belong to one so familiar with the inner workings of an organism as complex as this city. He knows that water doesn't reach millions of people without some very sophisticated and interesting mechanisms, just as surely as he knows that a modern city rises over the ruins of earlier eras.

His talent, though, is hardly limited to finding and exposing the invisible parts of the city. Greenberg is a skilled photographer who uses only available light and a four-by-five view camera, to elicit dramatic, almost gothic moods and near-perfect geometric compositions. His most interesting photographs are of the anchors of the city's masterful bridges. Beneath the Verrazano-Narrows is a harp of massive cables strung on steel eyebars in a concrete base. The bound cables of the Brooklyn Bridge crouch like giant springs just below the roadway, where they attach to anchors extending down another 90 feet. Deep inside the towers are vaulted chambers that once served as wine cellars for Manhattan restaurants. In an enlightening (if somewhat cranky) introduction, art historian and curator Thomas H. Garver observes how 20th-century cities have transformed public work sites from monuments to technology into bland, utilitarian spaces, while yesterday's grand "service places," as pictured in Greenberg's work, deteriorate unseen.

Only one photograph in the book shows a human form. This photo reveals the inside of a clock tower at 346 Broadway, where the movement of the clock lies inside a glass case between four translucent dial faces. Sunlight projects the numbers of one dial onto the glass, through which the gears of the movement are visible; further back, the light filters through the opposite dial. Amidst all this light is the ghost-like reflection of a man—perhaps Marvin Schneider, the city's clockmaster who spent ten years of his spare time restoring the clock to working order. Whoever he is, this reflection is a visual reminder of the ghosts of the laborers who once built and worked in these places. 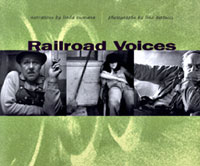 In Railroad Voices writer Linda Niemann and photographer Lina Bertucci collaborate to produce an honest and intimate portrait of one of America's most vital infrastructures. While the trains remain omnipresent, snaking across the countryside and rumbling through lower-income neighborhoods, the people who work these service corridors are as invisible today as the service places of Greenberg's New York. Automation has dwindled the ranks of railroaders, with most freights now running a crew of only two. Describing an encounter between a train crew and a family on the California Zephyr, Niemann writes, "[they] know every train or engineman by name; they know about their families, keep up on their lives. The usual encounter between rail buff and railroader is not at all this way. The buff wants to know about the motors, the track, the radio frequency."

Trains themselves are largely absent in Bertucci's gritty photographs. These are intimate portraits of the hard-working railroaders—mostly men—working, resting, and waiting. As we learn in Niemann's spare vignettes and oral histories, peppered with the esoteric jargon of the trade, these people do a lot of waiting: waiting for signals from the shrinking ranks of dispatchers; waiting on often drunk and unruly passengers on Amtrak routes; waiting to go home after three-week stints on the rails.

If it seems odd that two women would produce a book on the male-dominated world of railroad life, consider that these two were among the first women to work on the rails.

Niemann, who holds a Ph.D. in literature, left her university job in 1978 and has worked as a brakeman (railroad titles remain defiantly masculine) ever since. As her writing attests, she has worked doubly hard to establish herself in this world. Bertucci hired on as a switchman on the now-defunct Milwaukee Road in 1974. Only 19, Bertucci used her camera to return the gaze of her often distant, occasionally hostile, male coworkers. In the process she captured the personalities of the largely invisible laborers of the trade.