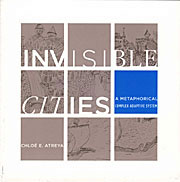 Complex Adaptive Systems (cas) describe the myriad non-linear connections and interdependencies of everything from ecosystems, economies, and genetic codes to species evolution and galactic superclusters. While cas are usually coldly spelled out in calculations, flow charts, and bar graphs that only the scientific elite can fully understand, they seem to aspire on their own toward embodiment in ways that the more artful of aspirants can grasp.

Thanks to Chloé E. Atreya and her work Invisible Cities: A Metaphorical Complex Adaptive System, the possibilities of holistically and intuitively understanding cas are made quite apparent. The author describes the many bridges between cas and Italo Calvino's intriguing, imaginal travelogue in ways that are more accessible to the analytically challenged among us. Parallels between Calvino's wondrous cities and such unlikely things as the periodic table of elements and protein molecules in DNA are deftly described throughout. These illuminating analogues encourage us to see just how integral cas are in our lives, and how critical a non-scientific understanding of them might be in regards to the survival of our species and planet.

Atreya also clarifies just how much structural forethought Calvino put into his book, demonstrating that the cities he created are not just the consequences of some ambulatory fantasy. She then provides effective illustrations which describe how not only cas themselves work but how Invisible Cities functions holistically. Her enlivening approach to Calvino's work is something very rare in the world of literary criticism. She also provides her own artwork which diligently charts out the complexly meshed coding system that Calvino used during the composition of his highly unique novel.

After reading Invisible Cities: A Metaphorical Complex Adaptive System one will begin to appreciate how Calvino himself valued imagination as a means to understanding the various cas which permeate our lives, metaphorical and otherwise. Atreya's book initiates a crucial dialogue between the disciplines of science, art, and literature, and will surely spark some cross-disciplinary revelations that will further bring cas to light.