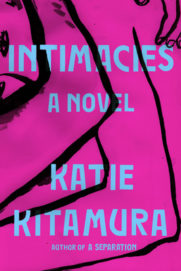 Early on in Katie Kitamura’s new novel Intimacies, the narrator encounters three municipal workers walking down a pedestrian street, directing a machine with a long, hose-like protuberance. They look as though they are “leading an elephant by the trunk,” and it takes her a moment to discern what they are actually doing: painstakingly vacuuming cigarette butts from between the cobblestones. “I looked down and realized that the road was strewn with cigarette butts, this despite the fact that there were several well-placed public ashtrays on that stretch of street alone.” The men’s work, she realizes, is necessitated by the “heritage aesthetic of the city, not to mention the carelessness of a wealthy population that dropped its cigarette butts onto the pavement without a thought.”

This scene dramatizes a dynamic that will recur again and again in the novel: the narrator—an unnamed woman living in The Hague—notices a dark reality carefully concealed by a polished façade. The men and their cigarette vacuum are “one example of how the city’s veneer of civility was constantly giving way.” This short, unnerving novel is full of other examples, including when, at a dinner party, a rare book dealer tells the story of selling “forty meters” of books to an interior decorator who, caring nothing for their literary value, wants only “leather and gilt.” The bookseller upcharges him for “junk, subscription editions, encyclopedias, remaindered monographs,” and later encounters those same books in a wealthy friend’s library, a symbol of his obscene wealth that is worthless when looked at up close.

The book takes place in 2016, just before the Brexit referendum and Trump’s election, at a moment when rising fascism and xenophobia were just becoming visible to many upper-class white people in the U.S. and Europe. “I’m worried about the Dutch election next year,” one character says, “this country has a reputation for tolerance but peel back the skin of it—.” That the rest—what’s under the skin—is left unsaid is fitting. Kitamura’s characters are often unable, or unwilling, to look directly at the violence swirling in the sewers beneath them. More broadly, Kitamura is interested in whether language is capable of representing the barbarism that underlies our society, and this novel raises the possibility that it might even serve mostly to conceal that barbarism.

The most dramatic context in which this question is explored is the narrator’s work as an interpreter at the International Court of Justice in The Hague, where she has a one-year appointment. She is assigned to interpret for the high-profile trial of a West African dictator, probably modeled on Laurent Gbagbo. This job requires her to translate witness testimony describing the particularities of the accused’s crimes against humanity: to speak the unspeakable as calmly, clearly, and accurately as possible.

Unsettled by these duties, she begins to see the other interpreters differently: “They no longer seemed like the well-adjusted individuals I had met upon my arrival, instead they were marked by alarming fissures, levels of disassociation that I did not think could be sustainable.” As the trial drags on and seems to flounder, she wonders if the entire project of the International Court of Justice might be yet another veneer, thus complicit in the horror it’s meant to prevent.

When the narrator meets the dictator in person, she is struck by his ability to dismiss the charges against him, as if mass murder and ethnic cleansing were trifles and the entire trial a mere inconvenience. His power and charisma, she thinks, come from his understanding of “the depths of human behavior. The places where ordinary people do not go.” At one point, the dictator raises the question of her complicity directly, accusing the court of Imperialism and asking her why she, an American, whose country has also “committed terrible crimes and atrocities,” is in any position to judge him. These are profound, disquieting questions, and Kitamura dramatizes them with subtlety and skill.

The novel contains two other, more prosaic subplots. The first concerns the off-screen mugging of a bookseller, with which the narrator becomes slightly obsessed. The other concerns her lover, Adriaan, who vanishes early on in an apparent attempt to save his marriage. After he leaves, the narrator continues to live for several weeks in his apartment, pining, hoping to hear from him, reluctant to accept the truth. Though the stakes here are much lower, they add to the mood of menace that pervades this book, and illustrate that, even in our domestic lives, we are more than capable of averting our eyes. True intimacy, Kitamura suggests, might require a reckoning that most people are unwilling to risk.